Tin Prices, Production Struggle in Spite of a Market Deficit

The tin price has suffered the same loss of momentum seen in other base metals as global growth has been stubbornly slow and the European debt crisis, if not worsening, at least shows no signs of getting any better.

Tin’s price weakness is all the more surprising when you consider the constrained nature of the supply markets, both in Indonesia and top refined-metal producer China. 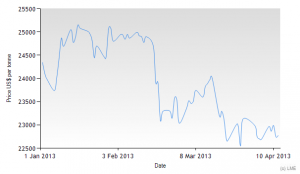 Global tin production slipped to 230,000 metric tons last year, from 244,000 tons in 2011, according to a Resource Investing News article quoting the US Geological Survey. The drop in production was mainly due to new government pollution controls, lower tin prices in the first half of 2012 and lower production in China due to drought conditions.

According to the article, by the middle of the year, over 100 small mines and processing operations had been shuttered in Kafang and Gejiu, Yunnan, in order to reduce pollution in the Hong and Mekong rivers.

The International Tin Research Institute (ITRI), in a recent statement, reports the closure of small mines may have been relaxed. While China’s refined tin production in January-February was 21,430 tons, down by 2% compared to the same period of 2012, mine production increased by 18% to 13,329 tons, according to the latest data from China Nonferrous Industry Association.

The rise in mine production is partly due to a revival in Guangxi, ITRI reports. Maybe to counterbalance the rise in domestic production, China’s imports of refined tin in February were down sharply by 51% compared to January, and 69% year-on-year to 1,145 tons, according to ITRI.

The World Bureau of Metal Statistics paints an equally subdued picture of the market for last year, saying the tin market recorded a deficit of 2,300 tons in 2012, yet total reported stocks rose last year, ending December at 33,700 tons, 3,800 tons higher than in December 2011.

Almost all recorded stocks are now held in Asia, the WBMS reports. The rise in stocks and fall in prices comes in spite of global reported production of refined metal (excluding re-processed LME metal) being down 10,200 tons in 2012, compared with 2011.

In the medium term, new uses for tin are likely to sustain demand as tin’s use in electronic solder applications is tempered by rising electronic production yet lower per-appliance use. A laptop uses less than a desktop PC, and a tablet or smartphone uses even less than a laptop.

Prices could find support this year from a higher Indonesian tin-purity standard, which comes into effect in July. The new benchmark could result in a 24% drop in Indonesian tin shipments this year, according to Resource Investing News sources, as the country’s smelters upgrade their operations to meet it.

Previous restrictions in Indonesian exports have supported prices, but with exports running above levels normally seen during the Q1 rainy season, it will require a marked turnaround in Q2 to lift prices.