Few would argue that the Japanese are world leaders in train technology (well, maybe the French would…and with some justification, their TGV rail network is impressive and technically as sophisticated), however, Japan not only started the high-speed rail concept with their first Shinkansen in 1964, but their reliability, punctuality and safety record put every other operator in the shade.

According to a fascinating, if slightly geeky, website called factsanddetails.com, the Shinkansen network extends to 2,397 kilometers (1,490 miles), nowhere near as extensive as China’s 5,779 miles, but then both terrain and country size are more in China’s favor.

As an occasional traveler on the British railways – although much better than in the days when the service was nationalized – I can still only wonder at an average delay that is usually no more than 10 seconds (yes, that’s seconds). Since starting in 1964, Japanese Railways’ Shinkansen service has carried more than 7.1 billion passengers without a single fatality.

China, though, has set its sights on being the high-speed rail operator above all others, not just domestically where plans are back on track (following a catastrophic crash in July 2011) to have over 11,000 miles of track operating by the middle of this decade, but also in export markets, where China has been bidding aggressively to build and supply rail lines and high-speed rolling stock.

Not to be outdone, and recognizing that conventional high-speed rail is reaching the limits of what is possible in raising speeds, Japan has announced plans to introduce a new generation of L0 Series trains.

These employ the latest magnetic levitation technology, known in some places as Maglev, instead of conventional wheels.

The service is not scheduled to start commercial services until 2027 and will cost billions to build. The following photograph, courtesy of a Telegraph article, shows the long aerodynamic nose, said to reduce wind noise and drag, of test trains undergoing trials this year. 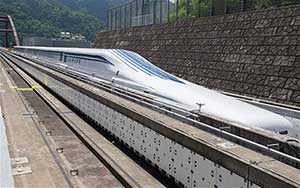 Both Germany and Japan have been working on Maglev trains for decades, and travelers to China will no doubt have tried the airport to (or, annoyingly not quite to) city service in Shanghai. But the enormous cost means no one has made it pay.

The train floats over the track as a result of repulsion of magnets of the same polarity on the train and the bottom of the track. There is virtually no friction, except with the air, which allows the train to travel so fast.