by Sohrab Darabshaw on September 4, 2013

Different views prevail among industry experts over why India’s exports of iron ore had dropped so drastically over the last few years.

The country’s Steel Minister Beni Prasad recently gave out figures in Parliament saying iron ore exports had fallen by nearly 70 percent in the last fiscal year, 2012-13. In that year, India had exported merely 18.37 million tons (MT) of ore as compared to 61.74 MT in 2011-12, Verma said. 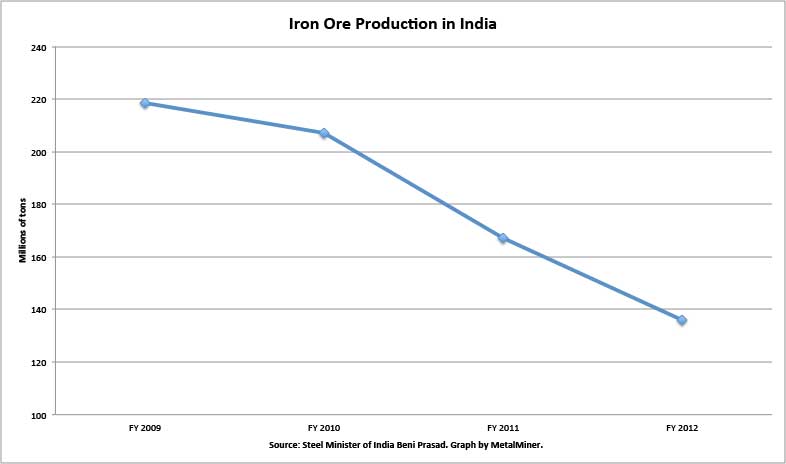 The one question that everybody in India connected with the iron ore sector is now asking – what went wrong with India’s iron ore story?

After all, until a few years ago, India was the world’s third largest iron ore exporter.

Two strong reasons that have been cited (and should be familiar to MetalMiner readers over the past year): the court-imposed bans on the mining of the iron ore in some of the Indian states such as Karnataka, and the increase in export tax to 30 percent.

One section of analysts believes the legal bans squeezed the iron ore sector so much that not only exports, but even production came down. The other believes the export tax is to be solely blamed.

While there may not be a clear answer to this, there seems to be some good news for this sector on the horizon. A report filed by Reuters noted that India was likely to drop the duty on iron ore exports to 20 percent from the existing 30 percent. Quoting government officials, the report stated that this could double shipments of the steelmaking ingredient in the current year. Even if iron ore mining remains banned in Goa, a tax cut would boost exports to 20 million tons by end of the current year.

The decline in India’s exports has allowed top suppliers Australia and Brazil and smaller producers from South Africa and Iran to step into the gap.

If the duty is reduced soon, a bulk of the exports may come from the eastern state of Odisha, the biggest producer of iron ore and whose output is forecast at 65 million tons for the current fiscal year. In Odisha and Jharkhand, there were about 80 MT of iron ore fines lying in mines.