OK, US manufacturers and suppliers – no more hiding, no more excuses.

It looks as though most manufacturing organizations are now aware of the SEC Conflict Minerals rule (encompassing DRC-sourced tin, tungsten, tantalum and gold in your supply chains) and, more importantly, of the need to comply with it by May 2014, according to a recent survey study conducted by Thrive on Risk (TOR) and ComplianceOnline. 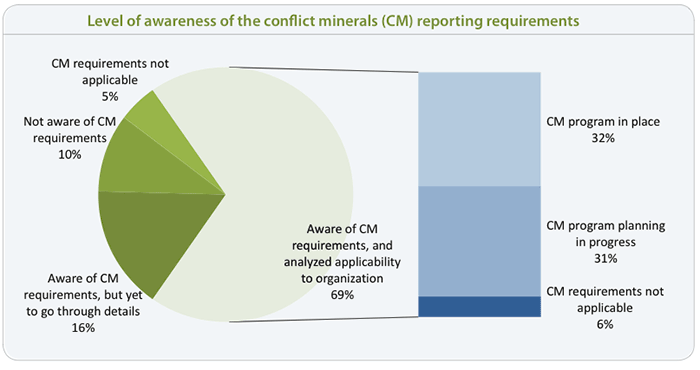 How to comply with SEC’s conflict minerals rule? At least folks know they have to. Image source: Thrive on Risk (TOR), ComplianceOnline, MetricStream

However, actually finishing their conflict minerals compliance processes, including Reasonable Country of Origin Inquiries (RCOIs), is a different matter. Survey results showed only 3% of industry respondents (comprising manufacturing, high-tech, automotive, aerospace and several other sectors) are done with the entire process and ready to file their reports with the SEC. “Most organizations as of June- July 2013 are either just initiating their supplier surveys (42%), or are yet to embark on this process,” according to the report.

Confusion still reigns – companies and their suppliers (especially suppliers) are still confounded by the scope and breadth of the law and everything it takes to comply. (Although the MetalMiner OEM audience is much savvier on average, as we found out after hosting Conflict Minerals EDGE last May). Certain questions still linger, such as, “How does one conduct an RCOI? Which suppliers should be classified as “contracted to manufacture” a product? How does one determine if a 3TG metal is necessary to the functionality of a product?”

Actually, many of your questions answered can be answered here: MetalMiner’s CM CheckPoint℠.

In It For the Short Term or Long Haul?

Decide what kind of organization you are, and your most pressing needs: do you need to simply get your ducks in a row to comply by May 2014? Or are you in a spot where you can implement a longer-term, platform-based solution?

If you’re the former, chances are you’ll gravitate more toward the manual, spreadsheet-based approach in your compliance efforts – which indicates the need to simply comply and worry about the longview later. It could also reflect your industry; for example, according to the survey, 60% of automotive sector respondents said they preferred the manual, spreadsheet approach, as opposed to only 14% of respondents in the high-tech industries.

So it turns out that a penchant for spreadsheets (over cloud-based technology) is not necessarily due to just the small-to-medium-sized manufacturers being a bit old school, but in how the company sees their strategy up through May 2014. The thing to keep in mind, however, is that a longer-term technology solution, such as platform-based, may be necessary down the line – for example, a diet of claiming “DRC conflict undeterminable,” spot-treating the rest of your supply chain and calling it good may not last forever.

This Is Gonna Hurt

According to the survey, “the SEC has predicted that the initial cost of compliance for organizations will be approximately USD 3 billion to USD 4 billion, with an annual cost thereafter of USD 207 million to USD 609 million.”

One respondent is quoted as saying, “Regulation is killing our ability to compete, be cost effective, provide shareholder value, and spend time on matters of importance to our business.”

We hear ya on that one – but keeping the considerations above in mind, and getting the ball rolling sooner rather than later, can only help.

Here’s how you can stop filling out compliance paperwork sooner and get back to competing in your market.