Home | Commodities | Is Zinc All Set For a Bull Run?
Market Analysis

Is Zinc All Set For a Bull Run?

There is not much to cheer the metals markets this year. Prices have broadly been in decline since the spring; and a wide – if not total –agreement that the commodities super-cycle has ended has dampened investors’ appetites for base metals as a commodity class.

Zinc, however, has a growing band of supporters who view two developments as evidence that zinc prices have only one direction to go. The first is falling inventory on the London Metal Exchange, down from 1,212,575 tons on January 4 to 1,035,575 tons this week.

The second is the closure of major mines planned starting this year, coupled with a dearth of new projects after years of under-investment by an industry dissuaded by low prices. As a result, firms like Wood Mackenzie predict that zinc prices will average more than $3,500 a ton from 2016-18 – compared with just $1,940 so far this year. In the latest quarterly Global Metals & Mining Review, HSBC agrees, if not with the price prediction, then at least with the trend of rising prices over coming years. 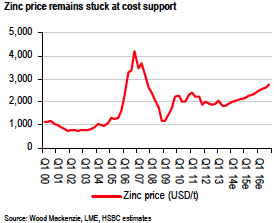 Certainly most agree demand will continue to rise. As HSBC points out, Chinese stimulus measures will be felt positively for several quarters and should therefore support demand in 2014. The stimulus is already evident, with Chinese apparent zinc consumption up 11% year on year to date in 2013, leading to a drawdown of SHFE exchange inventories and showing a 6% reduction in Q3 alone.

This has opened an arbitrage opportunity and has turned China into a substantial net importer of refined zinc. Year to date imports of refined zinc are 354,000 tons, up 17% y-o-y. 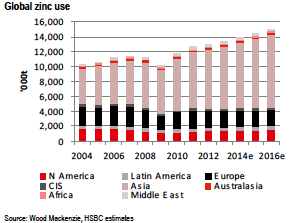 Even moderately rising demand will face falling supply by the middle of the decade, as some of the world’s largest mines reach their end of life. According to the FT, Brunswick and Perseverance in Canada, owned by Xstrata, closed this year. Late next year Vedanta is planning to close Lisheen in Ireland, which places among the dozen largest global mines. And in 2016 the world’s third-largest zinc mine, Century in Australia, is due to cease production.

New mines have been few and far between. And as a result of the polymorphic nature of zinc resources, co-production of copper, lead, and silver has kept many zinc mines running longer than expected, considering the low prices the metal earns. Hover, it has not been enough to encourage the massive investment new mines require.

So how can one offer caution against this bullish picture when faced with falling inventory, rising demand, and the imminent closure of major mines suggests we are in for a supply crunch?

Check back on Monday for Part 2 of this article.