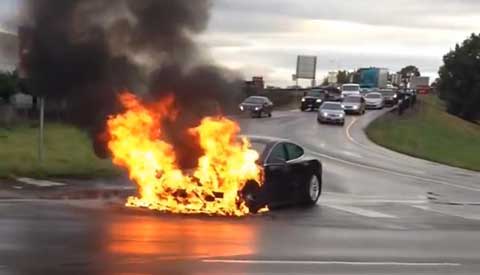 GM, Ford and Chrysler sales are on fire – well, in a good way. (Certainly better news than Tesla’s battery fires, above). Source: engadget.com

In spite of declining consumer confidence, a drop in residential construction and sales of existing housing stock, and mediocre retail sales, one section of the US economy is booming – cars.

Ford Motor Co. (NYSE: F) also benefited from a strong pick-up in truck demand, selling 16.3% more of its F-series pickups than last November. It also sold 51% more Fusion sedans than the same time last year – the Fusion has been a runaway success, becoming one of the best-selling cars in the US. Overall, Ford’s new vehicle sales were 7 percent up on last November, against forecasts of 6 percent.

But the biggest success story is arguably Chrysler, the No. 4 by domestic sales, with sales up 16% on last November, boosted by the popularity of its new Jeep Cherokee sport utility vehicle. The No. 3 producer, Toyota, by comparison, posted a more modest rise of 10.1% over last year while Volkswagen saw its US car sales plummet 16.3%, reflecting the lack of new models in its range.

So what underlying factors make this possible?

ANALYSIS: Why the US Auto Market May Not Be Driving So Fast and Furious

“Lower fuel costs and pent-up demand since the financial crisis particularly boosted larger vehicles for everything from crossovers [small sport utility vehicles] to the industry’s newest and best full-size pickups,” according to Kurt McNeil, GM’s vice-president of US sales operations.

Overall car sales are up as measured by November’s seasonally-adjusted annual rate of sales (SAAR) – a key industry measure. The SAAR figure is expected to reach 16 million vehicles for only the second month since the global economic downturn. This represents a 5% increase on the SAAR for November last year.

Rising production volumes in the auto industry have no doubt encouraged the major investments in auto sheet production announced by both the steel and aluminum industries recently.

Before we get too carried away, though, it must be said that GM’s performance came after an 11% year-on-year decline in September. Furthermore, continued strength in sales will require the magic formula of cheap finance, falling unemployment and a rising stock market to maintain optimistic confidence, in spite of the traditional engine of consumer optimism – housing – looking flat.

Interest rates are not expected to rise soon and US firms are certainly doing well with plenty of cash to invest, providing growth is maintained. All being well, the auto industry will face a better time of it next year than it did last year.