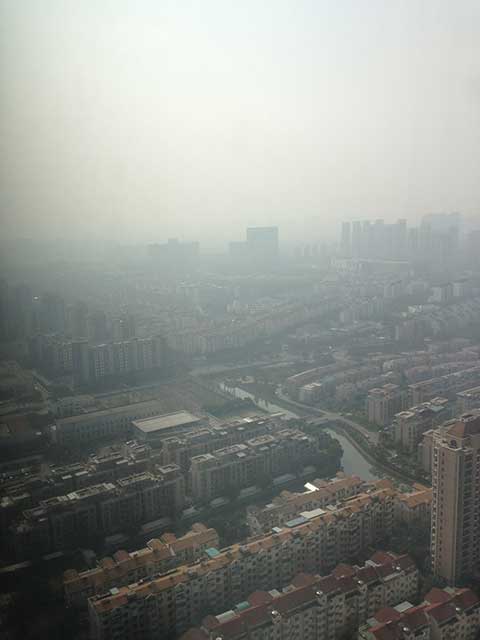 That China suffers from severe pollution is no secret: any visitor to the principal cities will have experienced some of the worst smog to be endured anywhere (case in point above) and even watchers of CNN or similar news broadcasts from Beijing or Shanghai will be familiar with the grey backdrop to the presenters’ words.

[Ed. note: The pollution is so bad that it may cause scooter-drivers to crash into 4 separate obstacles – then fall into a well, as this video below, which we featured in our biweekly newsletter Gunpowder last week, attests. Watch through the end; it’s worth it.]

Back to the serious issue: Beijing, in its latest Five-Year Plan, has highlighted the fight against pollution as a major objective, rightly identifying it as a cause of growing social unrest. According to Bloomberg’s Businessweek, seven of the 10 cities with the worst air pollution in China in the first half of this year were located in Hebei province, including the steel-producing city of Tangshan, according to the Ministry of Environmental Protection.

Pollution in the largest cities was three times worse than levels advised by the World Health Organization, the agency said in July. The Plan targets the four most heavily polluting industries – iron, cement, electricity and glass – in a move to improve air quality.

The major question is: will steelmaking get in the way?

China Daily admits Hebei’s industries are cited as a major contributor to smoggy days in North China, including Beijing, which the province virtually surrounds. These four industries produced the majority of air pollutants in Hebei, emitting at least 60% of the province’s sulfur dioxide, nitrogen oxide and dust, and accounting for 53% of the province’s use of coal – 167 million metric tons – in 2012.

The government will monitor the main 521 companies identified as the principal polluters and if found emitting over the limits, they will be forced to buy permits or pay fines. How effective this will be remains to be seen, but efforts to close older, more polluting production is showing early promise. Reuters reported that Tangshan, Handan and Chengde in Hebei province recently began to tear down 10 blast furnaces and 16 converters owned by eight steelmakers.  Hebei has been China’s largest steel-producing region for 12 consecutive years, such that now its capacity is over 200 million tons.

In addition to implementing emission permits and the monitoring system, the province will shut down 94 obsolete iron and steel sintering plants, install desulfurization equipment in 43 cement production lines and 94 glass-making lines, and update 49 coal-fired power plants to reduce dust emissions. The work should be completed by the end of next year.

That sounds like China may, by means of a drive against pollution, be finally coming to grips with its over-capacity in the steel industry. Or it would, if the country did not have a further 130 million tons of new capacity due to come on-stream by 2015.

These paltry reductions of old and obsolete plants will hardly scratch the surface of China’s over-capacity.  As Bloomberg tells us, the U.S., Canada and Mexico combined have 32 operating blast furnaces for making steel, according to the Association for Iron & Steel Technology. The city of Tangshan alone has 156.

Local governments, however, are reluctant to comply with widespread closures fearing loss of tax revenues and social unrest from large-scale unemployment. Closure of old plants (while new ones are quietly being built) are getting widespread media coverage. China’s Ministry of Industry and Information Technology is apparently considering creating a tradable steel production quota system as it tries to curb steel overcapacity, but how closure of capacity would be enforced is difficult to see.

Bottom line: non-production is not closer of capacity.

Pollution may prove to be an easier challenge to make progress on than over-capacity in the steel industry, as the incentive remains for steelmakers to close polluting plants in compliance of new environmental standards, but simply replace that production with new, less-polluting, more modern plants.

PREVIOUS POST:
Nelson Mandela Dies, But His Golden Legacy Should Live On
NEXT POST:
30-Day Low Finishes for 3-Month Price of Aluminum