Catching the headlines, one may be forgiven for thinking the global auto industry is doing very well.

Sales in the US generally did well last year, about 8% above the figure for 2012, which at 13% growth is itself exceptional albeit the beginning of the rebound in US car manufacturing after the financial crisis and bankruptcy for GM and Chrysler. 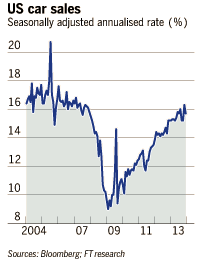 Some other SUVs and pickups – including GM’s GMC Acadia, which was 53% up on December 2012, and Ford’s F-series, which was up 8.4% – underline the benefit lower fuel prices and cheap credit have had for automakers as buyers seek out larger vehicles. Sales of the Ford Focus, by contrast, were 31% down on December 2012.

Generally though, December sales were disappointing and although the year as a whole was good, automakers may be looking as much overseas as domestically for good news in 2014.

China, by contrast, continues to dazzle, particularly for Western JVs if not for the domestic brands.

According to the FT, Ford posted the strongest sales growth in China after a series of new model launches boosted its performance. The US car company had previously reported a 50% year-on-year surge in sales to more than 935,000 units, overtaking Toyota as China’s fifth-largest foreign automaker. BMW reported a 20% increase in China sales to 390,000 units, whereas Daimler managed 228,000 Mercedes-Benz sedans in China last year.

Compare that to other emerging markets and the performance is all the more remarkable. Against China’s 18m units, India managed just 1.8m units in 2013, seeing the first decline in sales growth for 11 years. Brazil’s car market, the world’s fourth-largest, also reported its first annual decline in a decade as sales failed to top 3.77m units, according to the WSJ. Failed economic policies by President Dilma Rousseff’s government, debt and choking traffic conditions are blamed for a fall from double-digit growth in the last decade.

Europe also continues to struggle. The industry was pleased sales fell only 1.9% in 2013 over 2012 to about 11.54m, according to EuropeAutoNews. Compare that to 1970 when Europe made nearly 1 out of every 2 cars in the world. Only the UK, Spain (due to a scrappage scheme) and the Netherlands (due to January car tax changes boosting late 2013 sales) showed growth; Germany, France and Italy all declined.

2014 isn’t expected to be materially different. Falls in India and Brazil may be reversed if political reforms are made, but that is by no means certain. Europe too may manage a stagnant market as growth in the UK is supported by a reversal in Germany, but again, the rest of Europe does not hold out great scope for growth.

It could again be left to China and the US to provide cheer for the global auto industry, and of the two, China’s preference for smaller cars means profits may be stronger in the US.