A growing consensus is forming around the state of the aluminum market – after years of surplus, a few began to predict last year that the market was moving into deficit and a growing chorus is now supporting that, with some numbers to back it up.

HSBC’s Quarterly Metals & Mining Review is one member in that chorus, saying that 2014 will be characterized by a modest deficit carried over from 2013 that will not be met by new supply until into 2015. 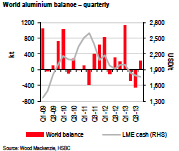 Firstly, supply. The bank says cutbacks outside China have started to meaningfully curb production, with output over the last two years declining 1.7 million tons from its peak of 26.5 million tons in October 2011.

Further cutbacks by Ormet and Rusal in Q4 last year, coupled with the delayed start up of Ma’aden in Saudi Arabia, will keep the market in deficit for much of this year.

Meanwhile, new supply is under construction.

The bank notes that Canada, India, Malaysia, the Middle East and Russia all have more capacity coming on-stream, but the Indian projects are almost certain to hit delays and the others will arrive over the next few years through 2017, rather than the next few months, leaving this year in deficit. 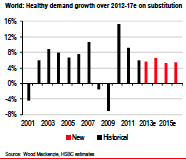 It is not just Alcoa Inc. that is predicting growth rates of 5%+ per year.

HSBC agrees, seeing 5.7% growth each year from 2012 through 2017 due to, the bank says, gradually increasing use in the transport sector, notably autos, and copper substitution in the power industry. The bank also notes the copper/aluminum price ratio is playing into aluminum’s hands by boosting substitution across a range of industries and applications.

But where those cutbacks have met rising demand most significantly is, interestingly, where the greatest physical premiums have manifested themselves this year, as this graph by HSBC so graphically displays. 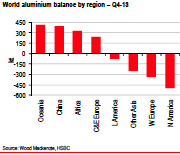 Shortfalls have been most marked in the US, which is where the largest physical premiums have manifested themselves, followed by Europe and Japan.

MetalMiner now has aluminum forecasts – check it out.