Will Alcoa Inc., Novelis Cash In On Automotive Aluminum “Shortage”?

MetalMiner jumped on Ford’s all-aluminum F150 coverage early with specific angles for buyers (check out What US Steel Industry Thinks Of Ford Motor’s Aluminum F-150 and Why Alcoa Inc, Novelis are Stoked About an Aluminum Pickup) – and now, since the words “aluminum” and “shortage” have begun being uttered in the mainstream press, we have to jump into the pool again.

Last week, as soon as we saw mention of aluminum shortages due to automotive demand, we tweeted this: 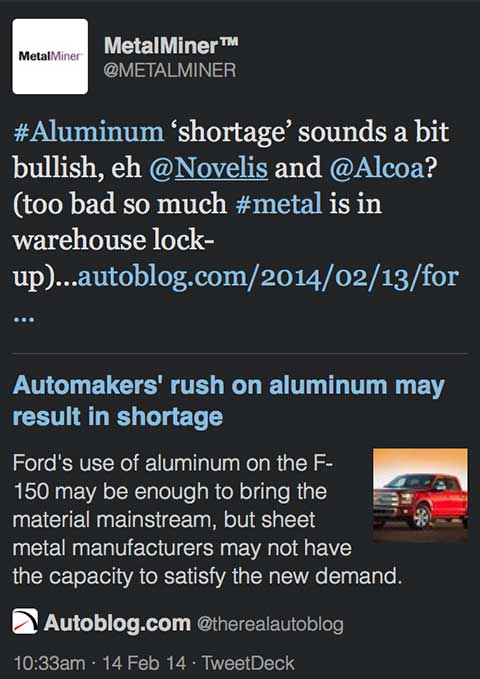 Of course, we love to try and stir up a bit of controversy around here (if merited), and knowing what we know about existing global aluminum supply being locked up and hidden from the market – not to mention big aluminum producers’ motives – we figured we’d give it a shot.

Well, automakers are still only using about 6 percent of the aluminum sheet produced globally, according to Novelis’s Tom Boney, and even though that figure is predicted to increase to 25 percent by the end of the decade, whether this will present a “shortage” is debatable. (According to Stuart’s analysis, if Ford continues to sell three-quarters of a million F-Series pickups with body panels, analysts say that would represent the largest single use of aluminum other than the collective use by the military, or at 700 lbs per vehicle and 2013 sales, that’s 242,400 metric tons of auto-grade aluminum.)

Not to mention that it won’t be a simple process for all auto OEMs to go mostly aluminum – new production techniques and equipment will be required. Some 15 different alloys are used in the latest generation of aluminum-bodied cars or light trucks, and the production process requires rivets and adhesives rather than welding for steel.

Oh, and one more thing: the new aluminum Ford F150 is not yet in wide release; the tale of the tape will be told after consumers begin testing the mettle of the lighter vehicle…and results could very well come back negative, forcing OEMs to re-examine their investment.

However, based on our recent aluminum market analysis, it now looks as though Alcoa and Novelis, two producers trying their best to cash in on increased aluminum usage in the automotive sector, may be doing the smart thing by boosting sheet production.

According to Stuart’s analysis of a recent HSBC report, the bank says cutbacks outside China have started to meaningfully curb production, with output over the last two years declining 1.7 million tons from its peak of 26.5 million tons in October 2011. Further cutbacks by Ormet and Rusal in Q4 last year, coupled with the delayed start up of Ma’aden in Saudi Arabia, will keep the market in deficit for much of this year.

Also, HSBC agrees with Alcoa on aluminum demand growth, seeing 5.7% growth each year from 2012 through 2017 due to gradually increasing use in the transport sector, notably autos. (The bank also notes the copper/aluminum price ratio is playing into aluminum’s hands by boosting substitution across a range of industries and applications.)

So that could very well translate to supply tightness in the domestic sheet market – and higher aluminum prices.