The price of iron ore, China’s biggest import commodity by volume, has lost 6 percent since mid-February as benchmark 62% grade iron ore for immediate delivery to China fell to $116.80 a metric ton just last week, according to Reuters.

That was the lowest level since June 28, with the price dropping 13 percent this year alone.

A surplus of supply has been predicted for some months now to be a growing threat to prices, but although exports from top supplier Australia are up, and the country has largely avoided the Q1 cyclone issues that have interrupted supply in previous years, the price falls seem to have more to do with demand than supply.

Much is made of China’s policy regarding pollution and Reuters mentions Chinese Premier Li Keqiang’s opening statements to Beijing’s annual meeting of parliament that the government would “declare war” against pollution. Part of that effort includes eliminating outdated energy producers and industrial plants with plans in place to cut outdated steel production capacity by a total of 27 million tons this year, although that only amounts to less than 2.5 percent of the country’s total.

The impact is likely to be more psychological than actual in the short term, as industry officials are quoted warning that plants with another 30 million tons of annual output went into construction last year alone; so although much coverage is given to Beijing’s pollution policy and its impact on steel production, in reality market forces are much more of a factor than public policy.

In this area we can see why prices have been falling. Iron ore inventory at ports has risen steadily from a low of 70 million tons (MT) in Q1 last year to 100 MT Q1 this year. Some 30 percent of that is estimated by The Steel Index to be used as collateral for short-term financing, but nevertheless it has a depressing impact on prices as even the material held under finance arrangements will be coming to the market for delivery in the coming months.

Meanwhile, finished steel stocks have also been rising, with transaction volumes down to one-third of their normal levels; steel inventories have risen to 19.44 MT, according to Standard Bank. Steel production and steel prices have both fallen as a result. Output is tracking at 725 MT per year equivalent at present, down from 750 MT a year ago.

As a result, steel prices and iron ore prices have both tracked lower, as this graph from TSI illustrates: 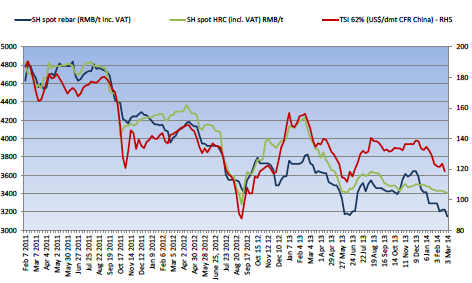 Steel production growth, meanwhile, has been trending lower since the summer and finally began contracting in February, as this other graph shows. 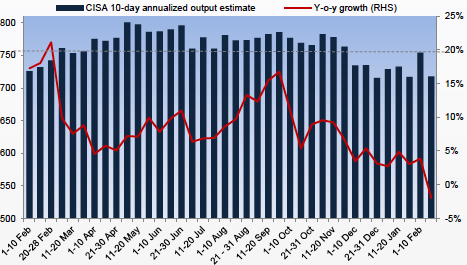