The expected bankruptcy of a Chinese developer owing billions of yuan to domestic banks has raised worries that a softening property market is heightening risks for the financial system and government finances.

Reuters reported that government officials said Zhejiang Xingrun Real Estate Co, based in the coastal city of Ningbo in Zhejiang province, is on the brink of bankruptcy. State media have estimated the company owes 15 domestic banks 2.4 billion yuan ($389 million) and individual investors another 1.1 billion, with only 3 billion yuan of assets on hand.

Property developers in some regions are caught between a double whammy of falling property prices and tightening credit. As a result, there are reports of half-finished projects being abandoned in China’s third- and fourth-tier cities and developers fleeing. The Telegraph reports three developers have abandoned half-built projects in the 2.5-million-strong city of Yingkou, on the Liaodong peninsular.

Yu Xuejun, the Jiangsu banking regulator, is quoted as saying developers are running out of cash, and as developments fail the local government’s revenue source dries up too. Land sales and property taxes provided 39% of the Chinese government’s total tax revenue last year, higher than in Ireland when such “fair-weather” taxes during the boom masked the rot in public finances. 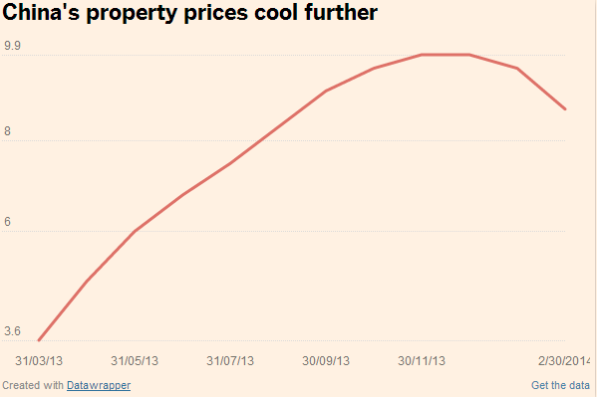 Some people are getting worried about China’s property market.

Li Kashing, Hong Kong’s top developer and Asia’s richest man, has been selling his property holdings in China, including the Duhui Palace in Guangzhou and the Oriental Financial Centre in Shanghai. Nomura Bank is quoted as saying residential construction has jumped fivefold from 497 million square meters in new floor space to 2.596 billion last year. Floor space per capita has reached 30 square meters, surpassing the level in Japan in 1988 just before the Tokyo market collapsed. 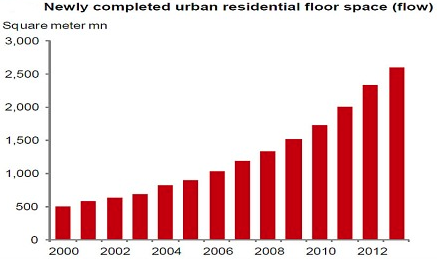 The IMF has warned the ratio of residential investment to GDP reached 9.5% in 2012, higher than the peaks in Japan and Korea, and much higher than in the US even during the subprime bubble. It also warned that China is running a budget deficit of 10% of GDP, once the land sales are stripped out, and has “considerably less” fiscal leeway than is generally assumed. 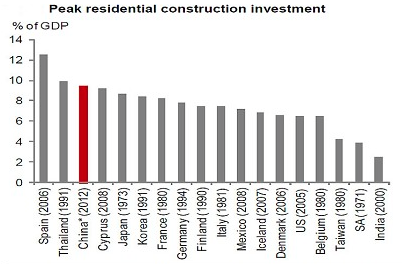 Headline figures in Beijing and Shanghai are often quoted supporting the state of the market. New home prices in Beijing rose 15.5%, in Shanghai they increased 18.7%, while in Tianjin they rose 7.1% for the month of February compared to one year ago. But prices fell in 43% of third- and fourth-tier cities and these cities account for 67% of the housing under construction in 2013.

To be continued in Part Two, including coverage of the “National New-type Urbanisation Plan” released last weekend.