Home | Minor Metals | Ferro-Tungsten Prices Have Spiked: What Are the Drivers?
Market Analysis

Ferro-Tungsten Prices Have Spiked: What Are the Drivers?

What a difference a year makes.

From the depths of despond in March 2013, when Reuters was reporting that tungsten demand had collapsed in Europe and prices could slide further, we are now seeing a raft of new mine projects being mooted for production in Europe, stimulated in part due to worries about constrained supply from China. 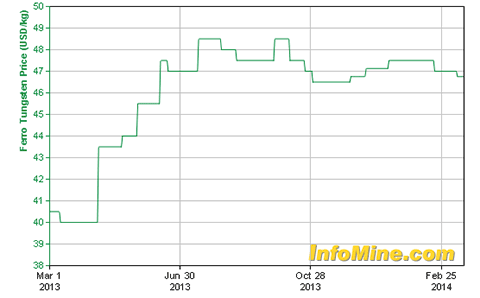 Both tungsten trioxide and ferro-tungsten prices (above) have risen, making mining in higher-cost locations like Western Europe more viable, while at the same time, attention has become focused on the precarious supply market for the metal with so much coming from China.

Chinese producers have seen exports restricted by a 20% export duty imposed by Beijing since the financial crisis in an attempt to encourage the manufacture of finished tungsten-bearing components and products rather than intermediate materials. At the same time, the European Union has identified the metal as one of 14 critical materials that are subject to a high risk of supply disruption and are poised to introduce voluntary rules to prevent European tin, tantalum, tungsten and gold companies importing so-called conflict minerals, much like legislation passed in the US.

This increases the attraction of having supply sources closer to home, so it was not surprising that Ireland’s Ormonde Mining managed to raise nearly €50 million ($60 million) to re-develop a mine in Spain expected to produce 2,270 metric tons a year. Ormonde secured a buyer for 100% of the output for five years and has said the project will remain profitable even if the tungsten price drops to $129 mtu, it is currently nearer $370 per mtu.

The pick-up in prices appears in part to be due to a recovery in demand among European consumers. Germany had been doing relatively well, but other states – France, Italy and Spain in particular – were severely depressed. That seems to be recovering, and demand is recovering particularly in the automotive sector.

We reported last year on a proposal by Wolf Minerals to re-open the Hemerdon mine near Plymouth in the UK, and that project has now completed the £123m ($200m) funding and is scheduled to be producing 3,450 metric tons of tungsten trioxide by mid-next year, making it Europe’s largest tungsten mine and larger than the total output of many countries, such as Russia.

Although new mines in the UK, Spain and Portugal will relieve consumers’ concerns about security of supply, industry experts are quoted by Reuters as saying they do not see it leading to a sharp fall in prices. With China remaining the dominant supplier by a long way, they will dictate prices and it is expected to manage supply to maintain a stable price, as has been the case in recent months.

Prices of ammonium paratungstate (APT), the intermediate material to tungsten, is currently priced at around $372-$382 per 10 kg. Although prices declined by about 10% from peaks at the end of August last year largely because of producers rushing to unload inventory before year-end, they have since picked up a little and maintained a relatively stable trend.

China is said to be building stockpiles probably as it manages supply to the export market, even as it develops new supply sources. Platts announced last month that China’s Ministry of Land and Resources confirmed the discovery of new reserves, including 174,000 tons of tungsten in a number of deposits. China is likely to remain the world’s largest producer for some time to come, although compared to their position in the last decade they are not content to export refined metal, but are encouraging producers to promote value-add components, alloys and tungsten-bearing products.

China sees tungsten in the same way Europe and the rest of the world do: as a key input for a sophisticated industrial economy, not a commodity to be wasted.