Certainly if iron ore imports are any indication, China’s steel industry is set for a rebound.

Reuters reported last week that China’s iron ore imports rebounded in March from a 13-month low hit the previous month, based on customs data. Demand was said to be boosted by rising steel production, increasing supplies of overseas iron ore and a drop in prices.

Iron ore prices fell to $104.70 per metric ton in mid-March, the lowest since October 2012. China increased imports of iron ore to 73.96 million tons, up 21% from 61.24 million tons in February, the lowest since February 2013, but to be fair, February was hit by a late New Year holiday, closing the market down for the first week or more.

More importantly, first-quarter figures taken as a whole iron out the monthly fluctuations caused by holidays – here imports surged 19.4% to 222 million tons from the same period of last year.

Yet to what extent is this supported by strong steel production?

Production had been slowing in recent months and steel prices have been falling due to weaker demand and over-production by the mills. According to another Reuters report, CISA is quoted as saying China’s average daily crude steel output dropped 1.1% to 2.073 million tons in the final 10 days of March.

Compared to last year, this suggests very little growth is evident in spite of repeated announcements by Beijing regarding the increased level of rail investment and affordable housing construction. China’s rail construction investment was up 9% year-over-year in Q1 to RMB 61 billion, with a target of RMB 720bn across 2014, covering 7,000 km of new lines.

In addition, the renminbi dropped against the dollar by 2.5% over the last two months, supporting exporters who have been suffering by a 30% appreciations since 2005.

Yet the latest import and export data suggests China’s industrial sector is not doing well. Both exports and imports unexpectedly contracted in March, according to the FT. Exports decreased 6.6% in March from a year earlier, missing forecasts for a 4.9% rise. It was the second consecutive weak month following February’s 18% year-on-year contraction.

The value of imports fell 11.3% year-on-year in March, although to some extent falling commodity prices are to blame; volumes held up better than the value figures suggest. 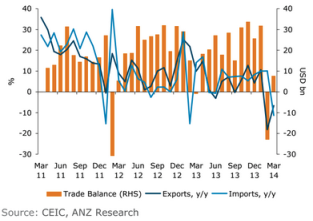 Nevertheless, crude oil imports, often a measure of underlying economic activity, were flat at 23.52 million tons in March from 23.05m tons in February.

Premier Li Keqiang ruled out further stimulus measures as had been adopted in previous years to boost the economy if it flagged, rightly saying more of the same would not help the medium- to long-term re-orientation of the economy towards a more stable consumer-driven model.

The rise in iron ore imports probably has more to do with steel mills and traders stepping back in to the market after January and February’s falls. The price falls were exaggerated as they delayed or plain cancelled shipments earlier in the year; now that they have come down, buyers have stepped back in to cover their positions.

But the buying spree is unlikely to be the start of another run-up in prices. Demand is definitely lower, both domestic and regional finished steel prices are weaker and for Western consumers of finished Chinese steel or steel components, the price falls represent an opportunity to secure lower costs in the quarters ahead.

PREVIOUS POST:
When To Buy Zinc And Lead
NEXT POST:
Chinese Primary Nickel Soars as Pig Iron Production is Cut