Renewables MMI®: India Claims the US, China, Others are Dumping Photovoltaic Panels 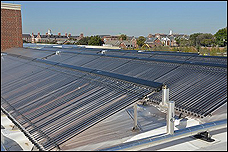 Dumping of silicon photovoltaic products by China, Taiwan, Malyasia and the US is causing losses to the tune of to India and its domestic solar industry, according to the Indian Solar Manufacturers Association (ISMA) which wants a 30 percent anti-dumping duty to be imposed.

“Thin-film, and silicon PV cells and modules imported into India from USA and other Asian countries are being sold at ridiculously low prices bleeding the local industry and violating international fair trade regulations,” H R Gupta told the Economic Times of India. Gupta is a member of the ISMA and managing director of Indosolar Limited.

Gupta said the Indian Ministry of Commerce started investigating anti-dumping cases centered on PV cells from China, Taiwan, Malaysia and the US in January. The European Union has already imposed an anti-dumping duty of around 48 percent on Chinese solar imports whereas the US too has imposed a similar duty ranging from 29.18 per cent to 254 percent on solar energy cells imported from China.

US grain-oriented electrical steel (GOES) saw essentially no change for the fifth day in a row, remaining around $2,964 per short ton.