Home | Commodities | China’s Thermal Coal Market: Too Much of a Good Thing?
Commentary

China’s Thermal Coal Market: Too Much of a Good Thing?

Reuters reported last week that the thermal coal market, after some months of decline, may FINALLY be bottoming out and offering the hope of a mild price recovery in the second half of the year.

The report is focused on the Asian seaborne coal market where rising supply has hit slowing demand growth leading to falling prices. Supply has outstripped demand for much of last year but, as Reuters points out, the response of many producers in Australia and Indonesia, the world’s top two coal exporters, to low prices has been to boost output in the hope of lowering unit costs per ton mined, thereby boosting profitability.

The problem with this tactic is that while it may work for a single miner or even a small number of miners, when everybody is doing it, supply swamps the market and pushes prices lower, quickly eroding any productivity gains. Perversely, though, China’s drive to cut pollution is having a beneficial impact on coal consumption as generators switch to better-quality coal and, in fact, use more of it when the modern generators start using scrubbers rather than just leave their air cleaning units turned off, as they had done previously.

Chinese domestic coal prices increased slightly last month and port stocks fell from 23 days to 18 as power demand has rebounded to 7.2% year-on-year growth in March from 4.4% in the Jan-Feb period. Although thermal coal is imported for other uses than power generation, about half of all imports are consumed for power and power production has been rising inexorably in spite of variations in economic performance as this graph shows. 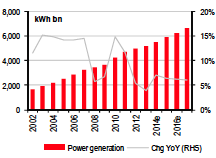 Of course, China is not the whole story.