In part one of this series, Thermal Coal Market: Too Much of a Good Thing?, Stuart Burns examined China’s demand for Asian seaborne coal. Here, he takes a hard look at Japan and South Korea’s evolving thermal coal demand in part two.

Japan and South Korea are both major importers of seaborne coal but, taken as a whole, Asia’s imports this year have fallen seasonally faster than in previous periods, as the below graph from HSBC shows. 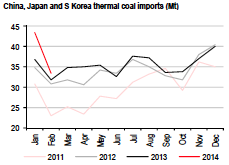 While power demand growth is expected to remain positive in China, in Japan the likely restart of nuclear power facilities means the end of the thermal coal rebound that started after the March 2011 Fukushima disaster.

HSBC reports that some 17 of the 50 reactors that were shut have applied to restart and two new units are under construction. The eye-watering cost of buying additional fuels, essentially liquid natural gas and coal, has been estimated at $93 billion from March 2011 to early 2013, providing a political incentive even the traumatized Japanese government cannot ignore. 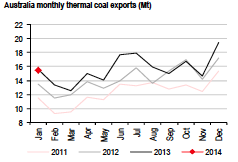 Monthly coal exports from Australia have risen steadily, as this graph from HSBC shows, and the market remains chronically oversupplied. Wood Mackenzie estimates that the price contracts in Japan were fixed for fiscal year 2014 around $81.80/ton. That was BELOW the cash cost of more than one-fifth of Australian exporters, equivalent to about 45 million tons per annum, according to HSBC. 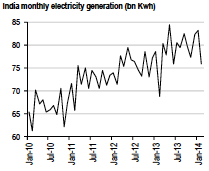 Although India’s imports are less than China’s, power demand has been rising there, too, and for the same reasons that rising living standards are driving the uptake of more electrical appliances in addition to demands made by industry. 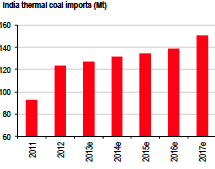 Nevertheless, the excess of supply and inability of the supply side to achieve rationalization will cap the commodities’ ability to achieve price increases. HSBC has cut it’s forecast for Australian FOB prices for the Japanese market to $85/ton from $86/ton for 2015. The good news for consumers is that power generators do not have any excuse to raise rates, at least those using coal-fired power generation.