Platinum investors must be a depressed bunch.

Platinum consumers, however, must be feeling like it’s been Christmas Day for much of this year. Against most predictions, the platinum price has not only failed to respond to what has already been the longest miner’s strike in South Africa’s history – it is now four straight months and counting – but rising imports from China and the launch last year of a major physically backed ETF have all failed to do much to the price buyers are paying. 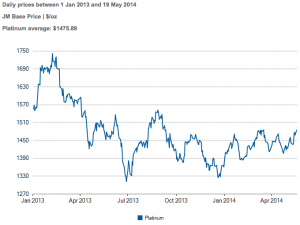 Indeed, since the launch last year in Johannesburg of Absa Capital’s NewPlat ETF the investment has soaked up more than a million ounces of platinum. To put that in perspective, Reuters reports the ETF has absorbed more than twice the total platinum investment demand in 2012.

Meanwhile, the strike by mineworkers union AMCU against Anglo American Platinum, Impala Platinum and Lonmin, has hit 40% of platinum supply. Impala Platinum is reported as saying the firm alone has lost 246,000 ounces of production to the strike so far and South Africa as a whole could close 1 million ounces of production this year. Yet prices are only $30 an ounce above where they were immediately before the strike.

Keen not to disrupt term contracts producers had stockpiled platinum in London vaults prior to the strike so they have not had to go out into the market, yet, to buy additional supplies. Nor has demand in Europe been strong, automotive new car registrations rose 6.3% in the first four months of 2014 but even after six straight years of contraction the market is only expected to show modest growth this year.

The only success story for demand has been China, and not for automotive. Almost all Chinese platinum imports go to jewelry, with the Chinese jewelry market accounting for almost 80% of the world platinum jewelry demand. Jewelry demand, in turn, accounts for almost 30% of total platinum demand.

With the market well supplied in spite of the strike and automotive demand struggling to get out of first gear, Chinese demand seems to be the swing factor dictating price direction. As prices near $1,500 an ounce, demand slackens and the price falls back. Sooner or later, the strike will be resolved, the producers made an amended offer to the AMCU last month but it failed to seal a deal in spite of some workers being willing to return to work.

It doesn’t seem like platinum consumers have too much to worry about. Prices are going through the same period of strength as in 2008-11 when it hit $2,290 an ounce on fears of South African supply or it’s 2011 peak of $1,912. Indeed, if the strike is resolved in the next 30 days a fall in prices is the most likely next directional change, if it drags on into the summer those European stocks will eventually run out and producers will have to come to the market, but the imminent threat of that may be enough for them to resolve the strike anyway.