Ryerson Inc, Lagunitas Chicago: Legacies Stand on the Shoulders of Their Founders

As Lagunitas Chicago’s taproom opens for the first time today, we’ve taken a look at two legacies – that of Joseph T. Ryerson, founder of what is now Ryerson Inc., a metals processor and distributor with $3+ billion in sales, and Magee, founder of Lagunitas Brewing Company, now the fifth-largest craft brewer in the country. Don’t miss Part One and Part Two of this article.

State of the Art: In Steel Distribution and In Brewing

A principal testament to Joseph Ryerson and Tony Magee’s mutual drive and success is their commitment to state of the art elements in every aspect of business. 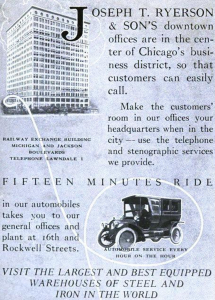 In 1922, Ryerson offered customers its downtown offices, located in the Railway Exchange Building, to use as their “headquarters when in the city,” urging them to “use the telephone and stenographic services we provide.” Best of all, they offered car service “every hour on the hour” to the general offices at the plant on the Rockwell campus – only a “fifteen minutes ride.”

Not only that, the company extolled at the time that “the Ryerson offices have been built for convenience and expedition of service. There is plenty of light and air and the most modern office equipment is employed on every hand. A 6-position private branch telephone exchange, yielding instant connection with every section of the plant and offices and the outside world,” according to Engineering World.

For his part, Magee has made sure that the best in German engineering – massive Rolec stainless steel tanks and fermenters – will take his brewmasters’ artistry and parlay it into 1.6 million barrels of beer per year when the brewery is fully completed. 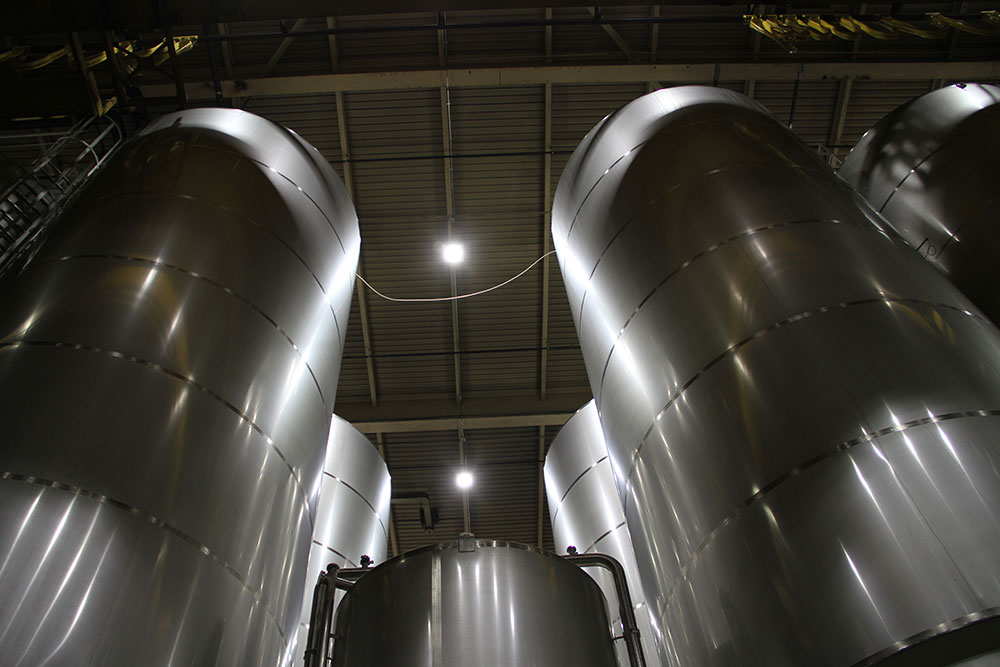 “Initially, we were going to use only half the building” for production, Karen Hamilton told me. “Then we realized we needed the whole building.”

Magee has also made sure to provide his own customers with a worthwhile fifteen-minute ride – on brew tours, for example. I was able to circumnavigate the operation on a catwalk that surrounds the gleaming stainless equipment, the humming bottling line and the mountain of silver-and-blue kegs stamped with “LAGUNITAS” on them, all ready to conquer the country east and west of the Mississippi.

Perhaps the most interesting crossover between Lagunitas and Ryerson Inc., between Tony Magee and Joseph T. Ryerson, is their companies’ legacy that many say will continue to last for many, many years to come.

All the way back in 1922, the editors of Engineering World made their thoughts clear:

Boy, they called it. Ryerson Inc., after several mergers and acquisitions through the decades, has expanded operations to Canada, Mexico, China and Brazil, has more than 100 locations and more than 4,000 employees worldwide, and reported sales of about $3.5 billion in 2013. Not only that, they continue to build on what started as a small iron shop on the banks of the Chicago River – with six service and processing centers and counting in China.

A similar sort of West-to-East expansion has been on Magee’s mind the past few years, with the fruits of his labor finally ripening in the successful opening of Lagunitas Chicago. Magee sees Chicago production taking a load off the Petaluma brewery by dropping to 60% capacity there, taking advantage of Lake Michigan water and upping the freshness of the shipped product by getting physically closer to eastern markets. Not only that, he’ll be cutting about $150,000 per month in total freight costs – which will help offset the $26 million price tag for the new brewhouses.

But he doesn’t intend to stop.

Now that the beer is flowing at Ryerson’s former West plant warehouse, Magee has been talking about expanding his legacy.

According to an article in Brewbound published June 17, his “internal picture” is to build five U.S. production breweries within the next decade and wants to turn his attention towards the planning process of building a third brewery in “the next couple of weeks.”

“There is nothing ambitious about what I am doing,” Magee is quoted as saying. “We have a place at the table. I have been dealt a hand and I want to play that hand. People that think Bud and Miller and Coors are forever institutions forget that when you watch a Dirty Harry movie, he is drinking Schlitz. I just want to keep up with the opportunity that has presented itself.”

If that Schlitz was in a can, it was likely steel, and may have come through a Ryerson warehouse at 16th and Rockwell.

Steel, beer and opportunity:  is there anything more Chicago – indeed, more America – than that?

Read the beginning of this series here.