The monthly Construction MMI® registered a value of 89 in August, on par with July’s value.

Bureau of Labor Statistics data shows how uneven the nature of the construction industry’s recovery is, as the sector added 22,000 jobs in July, yet still suffered a pullback in spending in June, according to an analysis by the Associated General Contractors of America. Association officials said that uncertainty about federal funding for a range of infrastructure and construction programs is one reason for the uneven recovery.

“Construction employment and spending are both rising at a moderate year-over-year clip, but there have been some setbacks,” said Ken Simonson, the association’s chief economist. “While prospects for private construction remain largely favorable, inadequate public investment still threatens to keep too many workers idle.”

Construction employment totaled 6,041,000 in July, the highest total since May 2009, while the industry’s unemployment rate of 7.5 percent was the lowest July number in seven years. 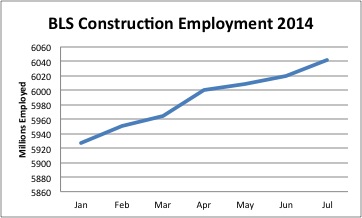 Last week, the senate passed an $11 billion funding bill to re-fill the Highway Trust Fund and extend a deadline to come up with a long-term solution for funding infrastructure projects until next May. The bill used customs fees and other funds to replenish the trust fund, setting up a fight before the construction season starts next year. Democrats believe that the federal government should continue to play a central role in transportation planning and funding. But if Republicans control both houses next year, they might seek to reshape transportation funding to reflect the philosophy known as devolution, which would allow states to raise and spend road and transit money unfettered by federal constraints. Keep your popcorn handy!

The last-minute extension and the uncertainty surrounding it is being blamed for the drop in public construction spending.

Transportation Secretary Anthony Foxx said in a blog post, “The good news is that Congress has avoided bankrupting the Highway Trust Fund. The bad news is that there is still no long-term certainty, and this latest band-aid expires right as the next construction season begins.”

President Obama has said he will sign the extension bill.

The Chinese low price of 62% Australian iron ore fines remained essentially flat for the month at $157.12 per dry metric ton. Chinese aluminum bar experienced a flat month, staying around $2,300 per metric ton. At a price of $523.19 per metric ton, Chinese H-beam steel did not budge the entire month.