Grain-oriented electrical steel (GOES) prices dropped by more than 6.7% this month, against the lowest level of imports in four years. That should surprise readers, because the petitioners of the GOES anti-dumping case, AK Steel and Allegheny Technologies, claimed in a recent post-hearing brief that, “Given the highly price-sensitive and competitive nature of the U.S. GOES market, subject import volumes had disproportionately large adverse price effects.”

In other words, the volume of imports, combined with low prices caused domestic GOES prices to drop.

The monthly GOES MMI® registered a value of 209 in August.

This past month’s data shows prices can fall anyway, with half the average recent volume of imports. Score one for respondents! And anyway, the domestic producers conceded that they couldn’t prove volumes caused them material injury.

Elise Woolfort, VP of Supply Management at ABB, the largest US domestic GOES buyer, testified at the trade commission’s July 24 hearing that three factors led to the decline in domestic prices. Woolfort stated that domestic producers themselves compete heavily with each other and most purchasers who responded to the commission’s surveys believe the domestic producers lowered their prices, competing against each other as opposed to low-priced imports as one reason domestic prices fell. Woolfort also testified that ABB negotiates domestic prices and volumes before it procures globally for the US market and last, product-specific pricing data, “show little, if any, relationship between US producer prices and imports prices.”

Some buying organizations have speculated that the domestic mills will raise 2015 contract prices, but MetalMiner remains skeptical (we will come to why in a moment).

Without question, some of the arguments put forth by petitioners warrant further consideration and have merit. For example, this statement will likely resonate across multiple metals markets: “…the significant expansion of GOES capacity in China in recent years has forced subject producers that have historically supplied the Chinese market to look for new markets in which to sell their GOES.”

We have seen the Chinese repeatedly “overproduce” with the express purpose of exporting additional capacity. This happens in semi-finished aluminum markets, other steel markets and even rare earths markets. Recently, the Chinese government announced it will tax GOES imports for re-export, thereby encouraging more domestic consumption of excess GOES capacity.

But the notion that US domestic GOES prices fell in 2011-2013 due to the volume of imports coming in at low prices appears absurd. The metal commodity chart that includes copper, aluminum, iron ore, tin, nickel, zinc, lead and uranium below shows a decline over the same time period as the GOES case (2011-2013): 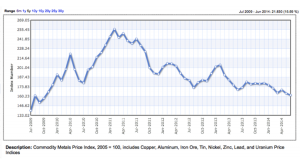 Certainly, all of those metals fell, too, but presumably not because of low-priced imports. Regardless, most industry observers believe the domestic mills will win this case. The next question becomes, what will happen to the domestic GOES price?

MetalMiner sources believe prices will rise given the outcome of the trade case and the fact that the domestic mills have refused to negotiate 2015 contracts until the final determination occurs.

But this case has always resembled a double-edged sword. Buying organizations have aggressively developed alternative sourcing strategies including buying stacked and wound cores from NAFTA neighbors. AK Steel and Allegheny Ludlum might see a lift in 2015 prices for the short term, but if 20% of GOES volumes suddenly leave the US market (not an absurd assumption), the two primary producers won’t recoup the volume losses with more favorable pricing.

As we previously reported, the domestic producers have managed to kill their golden goose. It’s no longer a question of if – only when.