No issue we have covered here at MetalMiner has been more contentious than the oft-brought accusation of one nation that another is dumping artificially supported product on the shores of another. As the regulatory environment has tightened here at the US, we found ourselves covering more and more anti-dumping accusations, court cases and international tribunals on everything from steel and rebar to the silicon used to make solar panels.

Some novel surprises this year included disagreement between different US regulatory bodies on whether Grain-Oriented Electrical Steel was dumped or not, India appealing a WTO steel dumping case it mostly won and a German multinational company draping itself in the American flag while trying to claim Chinese manufacturers were dumping silicon photovoltaic solar panels in the US. 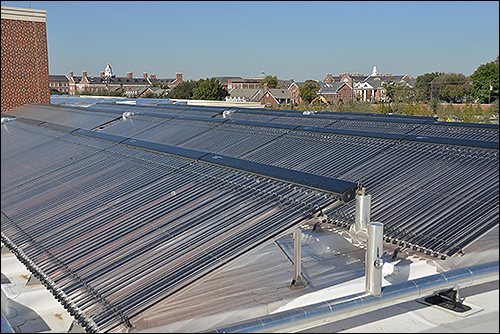 Guten Tag, Fraulein, I luf being an Ameri-can.

Back in February, Executive Editor Lisa Reisman wrote that the anti-dumping and countervailing duty strategy pursued by the two primary domestic GOES (grain-oriented electrical steel) producers, AK Steel and Allegheny Technologies (ATI), might backfire. This was in response to a GOES case the two US producers had pushed for that had reached the World Trade Organization in 2013.

The case dragged on for much of the year. Then in July, three WTO  judges reaffirmed a 2011 judgment in a separate case that set a narrow definition for what could be considered a government entity. According to this ruling, state-owned companies could not be considered “public bodies” because they were majority-owned by governments. Instead, the panel said, the US had to prove that Chinese state-owned enterprises also performed “government functions” or exercised “government authority.”

Around the same time, we here at MetalMiner released our GOES Market 2014 and Beyond report that put the entire sector into perspective as well as analyzed AK Steel and ATI’s chances at the WTO.

Then, just last week, the UN International Trade Commission threw everyone for a loop and voted 5-1 that AK Steel and ATI had not been “materially injured” by foreign imports of GOES produced by Japan, Germany and Poland and on import duties would be placed. Great news for foreign producers, right? Maybe not so much, as Reisman reported, many have already moved well down the path of shifting production to neighboring countries and won’t switch back to the US. Details of the decision in the first case come out September 9th, so stay tuned.

The GOES case wasn’t the only controversial dumping battle. One of the biggest successes of the renewable power industry is the use of crystalline silicon photovoltaic panels on homes and commercial buildings for electrical power generation. The US Energy Information Administration reported that use of US Solar Energy Production has more than doubled since last year. Chinese panel producers import US silicon to manufacture and send back inexpensive panels that are fueling the boom.

Great for US installers and producers of the panels, right? Not for world production leader Solarworld of Germany, which has a US subsidiary based in Portland, Ore. Solarworld filed a complaint with the Commerce Department to put duties on the Chinese and Japanese panels that are far more inexpensive than theirs. A German company using a US subsidiary to get duties placed on its competitors from nations other than the US? This would be laughed out of court, right? Nope, the US Commerce sided with Solarworld and placed the duties in June.

The Chinese manufacturers have not yet placed their own tariffs on US silicon but that could be the next shoe to drop.

While the above situations certainly showcased the strange nature of anti-dumping duties the most curious case of the year came when India, despite getting a favorable ruling from the WTO in a case related to the imposition of duties by the US on the export of steel by Indian companies, India STILL filed an appeal against certain portions of the ruling.

The WTO rejected a number of arguments put up by India which included challenges to over 300 instances of the use of ‘facts available’ and challenges to the US’ benchmark calculations, and inclusion of new subsidy programs.

While the WTO had concurred with India’s contention that the US’s move of levying countervailing duties (CVD) on Indian high-grade iron ore had contravened WTO rules, it rejected other objections raised by India on other technical issues such as how penalty duties were to be calculated. This was yet another case where the two US regulatory bodies, the Department of Commerce and the International Trade Administration, disagreed.

Confused yet? If not we’ve got plenty more anti-dumping coverage coming up the rest of this year!

PREVIOUS POST:
What 1995’s “Outbreak” Has to Do With Ebola, Aluminum Shipping and Supply Chains
NEXT POST:
The Best of MetalMiner Metals Market Research in 2014 – So Far