Home | Commodities | Can China Meet Its Own Growth Targets?
Commentary

Can China Meet Its Own Growth Targets?

The signals coming out of China are particularly confusing at the moment. On the one hand you read reports like IHS’ in the Telegraph predicting China will overtake the US to become the largest economy in the world by 2024 and on the other, you read growth is slowing and Beijing is working on targeted stimulus measure to achieve this year’s 7.5% growth target.

Not that anyone else would sneeze at 7.3% or 7.2% growth, but in a country where targets are considered politically important and when even 0.1% growth can add or subtract billions of dollars of knock on consumption for the region, it matters more than most other countries. The confusion comes not from one party being right and another wrong, but from what area of growth is being discussed.

Exports are certainly up, by 9% in the month of August compared to a year ago according to the PNC Voice, as global recovery fuels demand for Chinese goods. Imports, however, have fallen, shrinking by 2.4% following a 1.6% fall the previous month. Oil imports are up but so are exports of refined oil products making China’s net oil consumption lower, same with iron ore, coal and soy all down – although it has to be said falling commodity prices also contribute to lower import values in dollar terms. On Thursday, the preliminary HSBC China Manufacturing Purchasing Managers Index fell to 50.3 in August—a three-month low—compared with a final reading of 51.7 in July, according to the bank, pointing to a weakening trend in domestic activity approaching the 4th quarter. 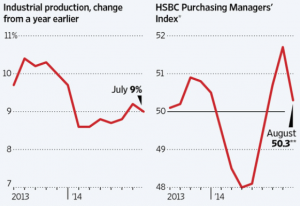 This hasn’t passed Beijing by, various targeted stimulus measures are in the process of being introduced with more expected. Hu Yuexiao, analyst with Shanghai Securities is quoted by the BBC as saying “We expect further loosening measures to guarantee a steady economic growth in the coming months. Such measures could include an interest rate cut, and cutting red tape to attract more private capital into the infrastructure and service industries.”

China’s central bank has already made more cash available for banks engaged in lending to agriculture-related businesses and small companies, by lowering the reserve requirement ratio (RRR) – the amount of cash banks needs to keep in reserve – Beijing has encouraged municipalities to relax restrictions on the purchase of housing but without much effect so far, buyers seem to believe prices have further to fall and are cannily holding back from purchases with the result, not surprisingly, that prices continue to fall.

So, the overall picture suggests the economy is split with exports doing well but domestic consumption cooling. Exports alone are not enough to raise raw material imports, so demand remains down relative to last year. The PBC has taken the opportunity to allow the Yuan to appreciate markedly, by 0.3% to 6.152/US$ according to Bloomberg, a 6-month high, making exports less competitive but imports cheaper in an attempt to stimulate domestic demand. Whether China overtakes the US as the world’s largest economy by 2024 is open for debate, but a slowing domestic market will make that possibility more remote unless Beijing can find a way to maintain domestic growth without repeating the mistakes post the financial crash of high debt levels and inefficient capital expenditure.

FREE Download: See how we did – 7 Metal Buying Strategies for 2014 (Base Metals, HRC, CRC)