It would seem there is no end in sight to the relentless rise in the aluminum physical delivery premium. Nor is this a cost that is being felt solely by big consumers, producers of semi-finished products (bars, rods) are passing the costs down the supply chain to end users big and small, whether or not they are aware that it is a separate physical delivery premium element of their pricing, or if it remains hidden as part of the conversion premium over the LME price.

According to a Thomson Reuters article, premiums paid over the London Metal Exchange (LME) cash price, have lurched higher in September to fresh record highs of $460-480 a metric ton for duty-paid material in Rotterdam, from $450-460 last month. That is more than a 60% rise since the beginning of the year the article says, when premiums were agreed in annual negotiations at $250-280 per ton.

Yearly negotiations begin in late October during LME week but typically drag on. This year they are not expected to conclude until well into November. Premiums elsewhere have risen with Q4 premiums. Japan recently agreed at $420/ton and the US Midwest premium at $.21-22/lb or $465-485 per metric ton.

An article this week by Andy Home of Reuters downplayed the role of LME warehouse queues in continuing to drive up premiums. Cancellations from the LME warrant system have reached a cumulative 1.5 million tons a year to date he says. Global inventory both in the LME system and outside remains immense, of course. Some 5 million tons in exchange warehouses and a further 7 million in off-market, lower-cost warehouses, much of it in both locations locked up in long-term financing deals. This scheme is and always has been the villain of market peace. The warehouse queues are a symptom of this deeper malaise rather than the cause.

There was speculation the stock and finance game may have had its day a month or so back when the aluminum price reversed into temporary backwardation due to a delivery squeeze engineered by one or more dominant market players for key August dates. That has now passed and the 3-month price has settled back to a $36/ton contango, again supportive of the stock and finance model as this graph courtesy of the LME shows. 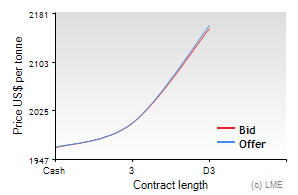 Although the level of exchange and off-warrant inventory will put a cap on investor’s aspirations for higher prices, it is clear the market is tightening. The article reports a Reuters poll in July that showed analysts expect the aluminum market to slip into a 444,000-ton deficit in 2015, its first deficit in nine years. This week, the World Bureau of Metal Statistics calculated the market as already being in deficit this year with the figure for January to July 2014 as 368,000 tons. Overproduction in China is also a debatable issue. Alumina prices are rising strongly as smelters rush to build alumina stocks and not only restart idled smelters but bring new capacity onstream in Q4. The market there remains robust and, for the time being, is consuming what is being produced with the only leakage onto the global stage coming in the form of rising semi-finished product exports.

The warehouse queues remain a block for the LME to reflect the true market price. For that we have to look to the CME at least as far as the North American market is concerned. The run down of the queues, while ongoing, is slow and could take another year and half to finally reach “normal levels” at the two remaining main holding locations for Aluminum, Detroit and Vlissingen, Netherlands. Until that time, the market price of aluminum at some $2,450 per metric ton will continue to be split between a hedgeable LME price and an at-risk unknown physical delivery premium. A premium that against all expectations is showing no signs of going away, but in fact is heading higher.

PREVIOUS POST:
Unthinkable? In India, Gold is No Longer All That Glitters
NEXT POST:
How NQA-1 Helps a Metal Service Center Better Compete