In the end, it turned out as many feared it would. The Supreme Court of India canceled all but 4 of the 218 coal blocks allocated for mining by the government over the last two decades.

Following this, power, steel and cement companies that were given these blocks between 1993 and 2010 will have to return them, and then, the government is free to either re-auction them or allot them to central firms.

MetalMiner reported in August that the apex court had found all such coal licenses illegal.

The coal blocks that were spared are being used for mega power projects by Reliance Power and the state-run National Thermal Power Corporation and Steel Authority of India (SAIL). 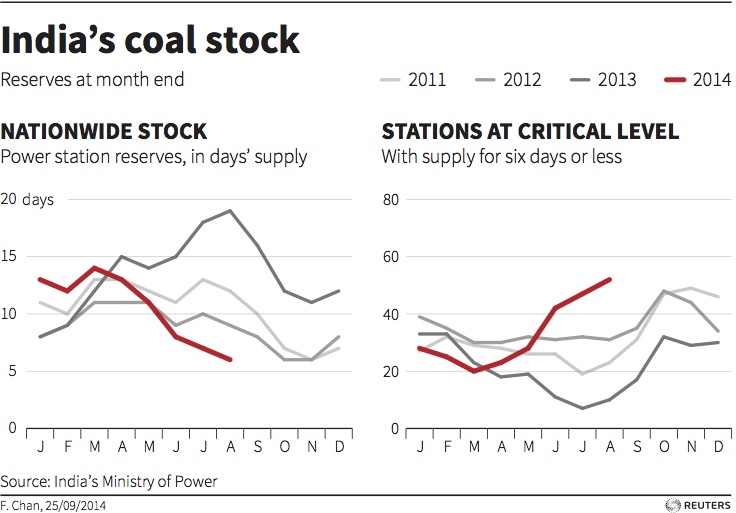 Of the 218, about 40 had started operating the mines, and they have been given six months to wind operations down. What comes as a double whammy to these miners is that the court has asked them to pay a hefty fine, about US $5 (Rs 295) for every metric ton mined so far. Though the final figure is being calculated, the fines itself are likely to end up in millions of dollars.

Though expected, the verdict has left Indian industry, and even its banking sector, numb. This is the second time in two years that the Supreme Court made such a ruling, which will have a major impact on the way India does business. In 2012, the court had ordered all 122 2G telecom licenses canceled, because of irregularities in allotment.

Metal stocks fell sharply after the Supreme Court’s verdict on Monday came in while even the Bombay Stock Exchange sensex fell by over 200 points but recovered later.

On August 25, the court had ruled that the coal blocks were allotted by “ad-hoc” means, adding that “common good and public interest had suffered heavily in the unfair distribution of the national wealth – coal.”

So now what? There are conflicting predictions coming in from industry and analysts. Some in India Inc felt the ruling would cause serious supply disruptions and heighten the power crisis, so also negatively impact the Indian economy.

A report in The Economic Times quoted the President of the Confederation of Indian Industry (CII) Ajay Shriram as saying the decision was likely to adversely impact domestic coal supplies in the country and would erode investor confidence. Almost all the major industry representative bodies were unanimous that the ruling would negatively impact the Indian business environment.

PREVIOUS POST:
Amplats Plans to Sell 4 Underproducing Platinum Mines
NEXT POST:
Week-in-Review: The Tenacity of The Copper Roach and Who Wants Putin’s Palladium?