As NFL players don pink cleats, towels and gloves for breast cancer awareness this month, more and more companies are getting in on the act. Houston-based oil-field services company Baker-Hughes is one such company. According to FuelFix, Baker-Hughes’ unique contribution to awareness, in addition to the company’s second $100,000 donation of the Susan G. Komen For The Cure movement, was 1,000 drill bits that had been painted pink instead of the usual gold paint Baker-Hughes uses. Drill bits. 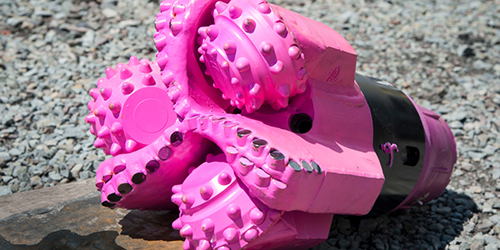 I will spread breast cancer awareness to the anthracite and bituminous markets. Image courtesy of Baker-Hughes.

Don’t expect me to pass judgment on anyone else’s philanthropy, but isn’t everyone pretty much aware already? What effect does a pink drill bit have on getting the word out?

“Our hope is from the water cooler to the rig site to the coffee shop to everywhere, someone gets this information to their spouses, their girlfriends, their daughters so we can create awareness and end this disease forever,” Bill Debo, director of operations for US land drill bits at Baker Hughes, told FuelFix.

Maybe he has a point. Maybe the constant barrage of pink NFL merchandise on your TV every Sunday didn’t get the message across. Maybe the Tijuana Flats Pink Taco just didn’t get the word out about early detection enough. Maybe that pink bucket of KFC went right over all of those American families’ heads on their way through the drive-thru. Maybe even the young women in the college demographic ignored the warnings from Mike’s Hard Pink Lemonade about getting mammograms early and often.

No, the time has definitely come for breast cancer awareness to break the Earth’s crust and these 1,000 drill bits are just the tools to get the job done. The job site’s a great place for workers in the oil and gas industries to discuss women’s health. Just look at all the fun the workers are having at this company event on Baker-Hughes’ Pepto-Bismol pink website.

If the event and press release don’t get enough awareness out, Martin Craighead, chairman and chief executive officer of Baker Hughes, will present a check for that $100,000 donation to Nancy Brinker, chair of global strategy and founder of Susan G. Komen, just prior to the final Pittsburgh Steelers’ “pink-out game” on Sunday, Oct. 26 at Heinz Field in Pittsburgh. The “pink-out” will no doubt be an improvement over the Steelers’ throwback uniforms with mustard yellow pants. Maybe the pink-out is just the bismuth subsalicylate chaser we, the viewers, need to digest those dijon football pants after a few Mike’s Hard Pink Lemonades and a pink bucket of chicken.

Oil and gas exploration and hydraulic fracking can certainly use all the good PR they can get these days and I’m sure that’s not lost on the well-meaning corporate citizens at Baker-Hughes. After the first $100k donated, though, the challenge becomes “how to top yourself?” My suggestion? No more pink stuff. Seriously. Donate the money you were already going to donate, and take the budget that would have gone toward pink chicken buckets, pink drill bits and parties and buy Devon Still jerseys with it. Or better yet, donate it directly to a hospital or cancer research program. Maybe drilling can just be drilling and philanthropy can just be philanthropy without all the fuss.