The drop in global stock markets this week is symptomatic of a deeper malaise as financial markets have woken up to the fact that deflation is a real risk for many European markets and possibly for Europe as a whole.

Greek 10-year bond yields rose 108 basis points this week to 8.94% as investors fled Greek debt. Just a week ago the yield was 6.6% as the radical left opposition Syriza party, which has dubbed Greece’s debt unsustainable at its current level of 174% of national output, pledged to reverse the EU/IMF bailout reforms and seek to write-off of 50% of the country’s debt if it comes to power. 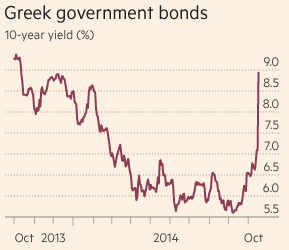 The resulting dash for cash as the FT puts it saw German Bund yields drop to a record low of 0.718% as investors sought safety.

The yield on Spain’s existing 10-year benchmark debt rose 25.6 bps to 2.33%, Portugal’s rose 30 basis points to 3.59%, a 2-month high and Italian debt was up 31.8 bps to 2.72%. The fear is that draining liquidity with the end of quantitative easing in the US, the possible, if now postponed, prospect of rising interest rates and slowing global growth will form an evil cocktail resulting in deflation and some countries will be unable to sustain their debts. According to the Telegraph France, Italy, Spain, Holland, Portugal, Greece, Bulgaria, and others are already in deflation, or close to it. The higher their debt ratios, the worse the damage will be as borrowing costs rise.

We wrote earlier this week that a falling oil price should be good for global GDP, but with only the US showing any significant robustness questions are being asked where that growth will come from. Oil producers are certainly feeling the pinch from falling revenues and are being forced to raid their reserves to maintain social programs. The Telegraph estimates the “fiscal break-even” price needed to cover the budget is $130 per barrel for Iran, $115 for Algeria and Bahrain, $105 for Iraq, Russia, and Nigeria, and almost $100 even for Abu Dhabi. The Saudis, themselves, are probably well above $90 by now.

“Who cares?” you might say. We should. These countries are also significant holders of western assets which, under duress, they may need to sell, such as holdings of foreign bonds, shares, and gold to plug the gap. Russia has run through $7 billion in recent days defending the Ruble. As they sell, asset prices fall further.

Nor can markets look to China to come riding to the rescue again with further stimulus. Beijing is rightly focused on addressing it’s internal realignment, trying to squeeze unproductive excess capacity out of the economy, wean companies off credit bubbles formed from past excesses and boost domestic consumption. Standard Chartered is quoted by the Telegraph as saying debt has reached 250% of GDP, off the charts for a developing economy and not a situation in which further borrowing should be encouraged. So long as unemployment does not rise too much above 5%, growth appears to have been relegated to second place in Beijing’s priorities.

For those with even modest memories, much less those of us brought up in a high inflation world, worries about falling inflation do not sound too alarming but lower commodity prices, sluggish wage growth and the rising cost of debt could push some developed western markets and some emerging markets into a deflationary spiral. Only Japan has experienced how serious that situation can be and how difficult, once it becomes established, it can be to turnaround.

PREVIOUS POST:
Report: US Construction Spending Now at Its Highest Level Since 2008
NEXT POST:
Nucor Gets Regulatory Approval for Gallatin Steel Purchase