Home | Commodities | Iron Ore Looks Like a One-Way Bet: That Way is Down
Commentary

Iron Ore Looks Like a One-Way Bet: That Way is Down

Iron ore hit a 5-year low last week, lack of demand for physical cargo saw the spot price drop to $76 per metric ton, the lowest level since June 2009 according to the FT. There appears no obvious end in sight to the slide in prices either. Traders reported a 170,000 ton cargo of 62% Pilbara mining fines for December delivery, was offered at $76.80 but attracted no interest.

The closure of steel mills near Beijing ahead of the Asia-Pacific Economic Cooperation conference this week has been blamed by many commentators as the reason for the lack of demand, but the slide has been relentless this year and the shutdowns in Hebei are only hastening the normal winter slowdown. The tactics of the big 3 iron ore producers are well documented. The strategy appears to be achieving the greatest economy of scale by going for volume and mechanization.

As prices fall, competitors will go out of business and the field will be left to Rio Tinto, BHP Billiton and Vale. Rio is accepted as the lowest cost producer but BHP intends to increase production at mines in Western Australia by 65m tons to 290m tons a year by 2017 in an effort to reduce costs so it can overtake Rio as the cheapest iron ore supplier, meanwhile Vale is looking to lift output to 453 million tons by 2018 from 306 million tons in 2013, according to the FT. 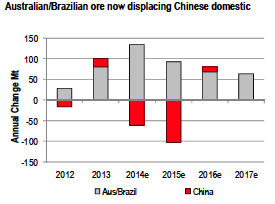 This strategy is having limited effect so far. Indian, Iranian, African and other sources have been priced out the market, some Chinese domestic production, likewise, has thrown in the towel, but much iron ore production is supported by local states or are captive mines of steel mills giving them an advantage in the fight for survival.

The excessive levels of production, though, will not be easily turned back off without leaving massive capital expenditure unproductive. The pressure to keep mines running at or near their new capacity limits will be considerable. This level of oversupply could, therefore, be with us for years to come.

HSBC is not alone in downgrading its further-dated price forecasts. The bank is still showing $85 per metric ton for 2015, which on current indicators may already be out of date, but they do not see it rising in 2016 or 2017 and continuing to fall by another $5 per ton beyond 2017. Not great news for investors in mining companies who had been hoping for some dividend returns as wider capital expenditure budgets were slashed in recent years, but good news for steel consumers as both iron ore and coking coal prices look to remain weak through the second half of the decade, reducing one area of pressure on mills to raise prices. 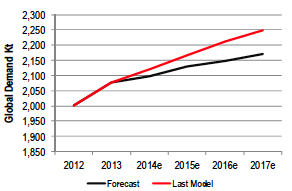 Global demand remains positive in spite of the slowdown in GDP growth in China and elsewhere. By HSBC’s estimate, growth in steel production and, therefore, iron ore demand will be lower than had previously been thought.

The strengthening of the US dollar since the summer has only heightened miners’ enthusiasm for volume growth as they receive a better return in Australian dollars or Brazilian Reals for every ton they ship than had been the case before. With predictions, the US dollar has some way to go in this trend once the Federal Reserve starts tightening interest rates. Next year miners will have even less to hold them back from continuing to try and push down the cost curve in 2015.