Elevators: Pushing the Limits of Height 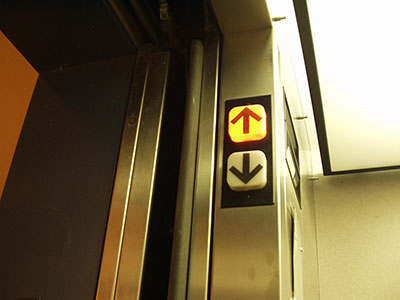 It is not the kind of technology that often gets covered or indeed we often think about, not unless you are of the nervous disposition and, like me, can’t take a ride up an elevator without visualizing the drop below.

But, some 210 billion elevator trips are taken every year in the US and Canada, and problems are thankfully rare. Although we may not be immediately aware of it, the elevator industry is thriving. For the ThyssenKrupp group, struggling with their core industry of steelmaking, the elevator and escalator division has been a consistently profitable jewel in the corporate crown.

Nor are they alone, Finnish manufacturer Kone is joined by Japanese makers Mitsubishi, Hitachi and Toshiba in addition to ThyssenKrupp all pouring money into developing the technologies to service taller and taller buildings. Over 160 years after Elijah Otis revolutionized the elevator industry by implementing a safety brake system, Otis is still the world’s largest manufacturer but the competition is heating up.

Elevator technology has improved in small steps for decades, incremental changes have to be rigorously tested in an industry where, understandably, safety remains as paramount as in aerospace. What is sparking the current innovation drive is the race to build the world’s tallest buildings, as skyscrapers race higher the next generation of elevators is striving to exceed record-breaking speeds of 4,000 ft per minute according to the FT. 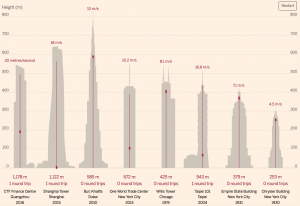 As buildings get taller, passengers have to be moved faster and faster to make upper floors accessible in a reasonable timeframe. Using new motors and high-tech pressure systems this decade has seen a transformation in the speed and height of lift systems. For the past decade, Toshiba’s lifts in the Taipei 101 office tower in Taiwan have held the title of the world’s fastest elevator, with speeds of 16.8 meters per second, the FT reports.

However, in the next two years this speed record is set to be beaten, first by rival Japanese lift maker Mitsubishi in 2015, with elevators in China’s 121-story Shanghai Tower that travel at 18 m/s (3550 ft/minute) and then a year later, Hitachi is aiming to set a record with lifts in the Guangzhou CTF Finance Centre that climb at a rate of 20 m/s (4,000 ft/minute) the equivalent of traveling from the first floor to the 95th in 43 seconds.

Limitations are many, not least the safety systems of course, but also passenger comfort as air pressure changes become extreme and the acceleration/deceleration rates increase. Weight of both the lift itself and the main and backup cables supporting the car have been a major limitation dictating both the ability of the motors to accelerate the car and the length of the cable itself.

But in a potentially transforming move, Kone last year launched a carbon-fiber cable called the ultrarope, which is said to double the length of a single lift line from 500 meters to 1km. Taking 9 years to develop, the new rope is said to be 7 times lighter than steel cables and promises to extend longevity to twice the lifetime of current steel cables.

The future could hold more than just height and speed. The FT reports lift makers are already thinking about how the development of linear motors could allow rope-less elevators that move both vertically and horizontally – rather like Willy Wonka’s elevator in Charlie and the Chocolate Factory! The technology has existed for 20 years but application has been dependant on a need for 100% safety. Albert So, an elevator expert, is quoted as saying vertical speeds are reaching their limits if only because of the acceleration/deceleration and pressure changes the lift occupants can withstand have been met, but even so the 20m/s limit will spur skyscraper development for much of this decade even if the Willy Wonka lift system is still a little way off.