The steel industry has enjoyed rather a good last 18 months; prices on the whole have held up relatively well, capacity utilization in the US is good, helped by mill discipline and a growing economy, and raw material costs have been coming down aiding mills’ margins. In Europe, mill orders are quite well-booked out to the end of Q4, although demand is heavily reliant on the automotive sector, which is showing signs it may be peaking.

That stability, though, is at risk of being undermined, according to US mills who have taken action to limit a surge of Chinese imports threatening to undermine the status quo. Last week, the Department of Commerce imposed duties on the imports of carbon and alloy steel wire from China after complaints of dumping made by several North American producers.

According to the Telegraph and MetalMiner, some Chinese exporters of steel wire to the US will face anti-dumping duties of as much as 110.25%. The reason for the surge in imports is not hard to find, there has been a dramatic slowdown in demand for steel in China as the market has cooled, liquidity has become tight and construction has been depressed due to falling property prices. Meanwhile, the country’s steel mills have continued to churn out metal.

According to HSBC, traders’ inventory is now at a historically low level, down 22% year-on-year, and down 44% from the peak at end-February, yet inventory at steel mills is 18% higher y-o-y. Yet, in part due to falling raw material costs, mills’ margins have held up relatively well encouraging them to continue record production levels. 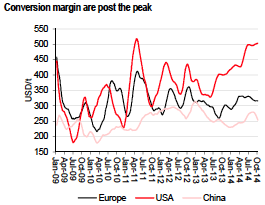 China has retaliated to the US action by demanding the US “resists policies and abide by their country’s global commitments to maintain free trade,” the Telegraph reports, but their calls will fall on deaf ears.

China produces half the world’s steel but if their domestic market cannot absorb the record levels of production then the logical solution is to cut back, not flood fragile export markets. Chinese stainless steel exports to Europe have surged by 115.4% to 522,000 tons in the first 3 quarters of the year Macquarie Bank is reported as saying, and China’s share of the market for cold-rolled stainless steel sheet metal, has climbed to 35% in the past few months, up from just 10% last year.

Meanwhile, Platts’ China Steel Sentiment Index is said to have recently slumped to its lowest level since it began tracking the market in May 2013, as producers absorb slowing domestic demand and a tougher environment for exports. The index has dropped 12.47 points month-on-month to a reading of 25.61 out of a possible 100 points in November. As with most sentiment surveys, a figure below 50 indicates contraction. Clearly, the pressure to export their way out of trouble isn’t going to be reversed anytime soon by domestic demand so, unless margins come under pressure, exports will remain at elevated levels 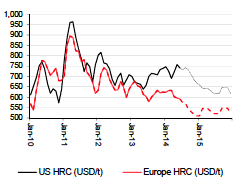 Declining global raw material costs, including scrap, and still acceptable conversion premiums in China suggest production is not going to be curbed this side of Q1 next year. Chinese exports are therefore going to continue to weigh on prices in spite of action by the Commerce Department to limit their market penetration. Chinese imports in certain categories may be essentially blocked but they will simply flood other markets like Europe, Asia and South America displacing production there and forcing producers to seek a US home for their metal, often at cost. While consumers naturally seek lower prices, steel production has to remain profitable for a long-term industry to remain viable. China needs to get its house in order.