While Americans were tucking into their Thanksgiving turkeys, over in Europe a third of the world’s oil producers were cooking up a very different sort of dish. After Thursday’s decision was announced, ICE January Brent, the international oil benchmark, fell by $6.50 a barrel to $71.25, its steepest one-day fall since 2011. 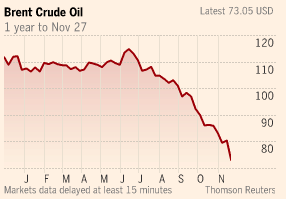 Just a month or two back, commentators were speculating that Saudi Arabia’s aggressive stance on output and offers of discounts to secure sales were seen as forms of covert economic war against Iran in particular, but against other non-allies such as Russia as well.

Saudi Arabia, it was said, is fighting for its market share and, in the process, is quite pleased if it’s causing a little pain in some quarters. However, the failure of OPEC to agree to any cutbacks to shore up falling prices at this week’s meeting in Vienna has been widely reported as an attempt by the cartel to squeeze all low-cost producers out of the market, including and, maybe specifically, US shale or tight oil suppliers.

If the intention is to put current operators out of business, it’s unlikely to succeed an FT article says. Production costs vary, but Jason Bordoff of Columbia University is quoted as saying many facilities producing oil from Texas’s Eagle Ford and Permian strata would remain viable at $40-$50 per barrel and although production from the Bakken Formation of North Dakota and Montana would be more affected than Texas shale output, the impact was likely to be more on private equity investors’ willingness to get into new projects than existing operations.

OPEC went to great pain to not single out any particular region or industry, saying “We are not sending any signal,” but a number of production technologies and countries are clearly more exposed than others. Extraction from Canadian tar sands is one such technology. Production of bitumen by mining is typically only viable at above Canadian $50 per barrel, (US$44/barrel bitumen), the current market price, according to Andrew Leach of Alberta University quoted by the FT.

The resources can still be tapped by drilling and breaking even is still possible at lower prices. In addition, the bond markets are getting increasingly twitchy about shale oil debt, raised as it is in a very low-interest-rate environment and as it requires a certain level of oil price to maintain cover. As the oil price falls and interest rates rise, debt default becomes more likely.

The refusal of the Keystone XL green light may be seen in years to come as a wise decision. A prolonged period of lower prices and rising carbon taxes could make further development of oil sands doubtful. Likewise, exploration in high-cost regions such as the Arctic and in deepwater such as offshore Brazil will be very challenged to move forward in the second half of this decade if prices don’t recover soon.

The decision from Vienna was not unanimous by any means. Although OPEC tried to put a gloss on the outcome there remained deep divisions. Countries like Venezuela, Nigeria and Iran pushed hard for quota cuts to bolster prices. As a later FT article shows many oil-based economies need a price well above the current level to balance their books. Some Gulf states such as Kuwait can balance their budgets at a price for Brent crude of $50, Saudi Arabia however needs $90 after years of profligate spending on welfare programs, subsidies and giveaways. Huge foreign exchange reserves will carry them through an extended sub-$90 price for the time being, though. Not so for some others. Russia is teetering on the edge of recession and is said to need a price of $110 to balance its budgets. Iran needs $130 and basket case Venezuela $160!

For consumers in the short term it’s good news, lower gas prices will be welcome at the pumps, lower oil prices will be good for the global economy – the Shanghai stock market surged on the news – and inflation will be reduced, not that high inflation is a problem for most countries, indeed deflation is for some more of a threat.

Speculation is rife as to how low the price can go from here, sub $70 is probable, with some brave souls putting a number closer to $60 per barrel during next year. You can’t help feeling the pips will begin to squeak before then, even in Saud Arabia. If the Saudis have a change of heart, the rest of OPEC will rush to support cutbacks and offer support to the price, but with the US such a significant producer the market is less likely to spike than it was a few years ago. 2015 should at least see a consistently lower oil price, regardless.