Home | Automotive | Week-in-Review: How Much Will Your New Aluminum Truck Cost to Fix?
Commentary

Week-in-Review: How Much Will Your New Aluminum Truck Cost to Fix?

Automotive consumer website Edmunds.com bought a new, $52,000 F-150 from Galpin Ford in Van Nuys, Calif., and then hit it twice with a sledgehammer to see how much it would cost to fix vs. a traditional steel-bodied truck.

According to Edmunds, their Ford dealer estimated this level of damage would require “seven to ten days” of downtime on a new aluminum-bodied 2015 Ford F-150, “while the repairs to steel bodywork would have taken four [days].” 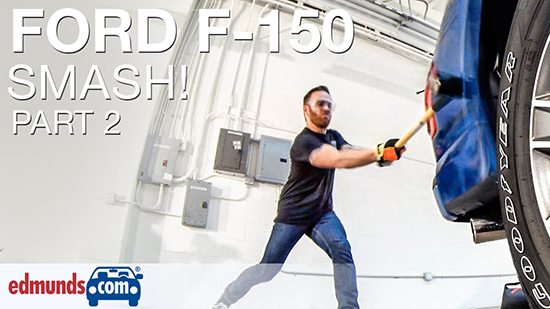 Please, hammer, don’t hurt ’em! Image of a Ford F-150 getting hit with a sledgehammer courtesy of Edmunds.com.

The staff at Edmunds said the damage was done while the truck was parked and they had no idea how it happened. They also didn’t let the dealership know they were affiliated with Edmunds or the automotive press in any way. They also offered to pay in cash rather than go through an insurance company, telling the dealership that they would rather not have their insurance rates go up as a result of filing a new claim.

The body panels are no more expensive now that they’re made out of aluminum. The price for a replacement right rear-quarter panel on a steel-bodied 2014 F-150 is $967.48. And for the same panel on an aluminum-bodied 2015 F-150? $967.48. That’s nice to hear, but what would it have cost to fix a steel panel rather than replace it?

According to Edmunds’ estimate, there are 24.4 hours of billed labor. Of that, 20 hours were listed for the repair of the aluminum body panel. The other 4.4 hours were for things like removing the molding, taking off the bumper and uninstalling the tailgate. Edmunds assumed that that labor wouldn’t take any more or less time regardless of what the parts were made of.

Edmunds’ service advisor assumed fixing a steel panel would take half the time, though. It works out to just 14.4 hours of labor. Work that in to the estimate and they came up with a total of $2,338.44. That’s $600 less for the steel panel thanks to the fewer hours billed.

On top of that, assuming that the labor rate for aluminum was the $120 an hour, the service advisor told Edmunds, and going with the quoted time of 20 hours of body labor to pound that panel out, the total came to $4,138.44. That’s a difference of $1,800, a price increase of nearly 77% versus the cost of repairing a steel panel for 10 hours at $60 per hour.

They also called a local body shop to compare prices and got a similar estimate.

That prompted Ford to send this response out to Edmunds and the truck-buying public, in general: “With the proper tools and training, cosmetic repairs to aluminum body panels will take a similar amount of time as steel panel repairs. We know this from the hood of the F-150, which has been aluminum since 1997. Repair data show it takes a comparable amount of time to repair F-150 hood dents as it does competitors’ steel hoods. In the case of major collision damage, in many cases, the new F-150 will be easier to repair, thanks to its innovative modular structure, which reduces repair time and helps save costs.”

One thing we can all agree on, though? Smashing stuff with a sledgehammer is fun.

What does this have to do with the week in commodity metals? Well, aside from it being about a major supplier to the red-hot automotive aluminum sector, a lot of steel manufacturers and end users started cutting costs this week in preparation for a period of long-term high costs and low profits.

The strong dollar and a patient approach from the Federal Reserve hammered home that both producer and end-user costs will stay high this year.
That means a winter of analysis is coming. All-in pricing, supply chain efficiency and product profitability will all need to be scrutinized in today’s high-cost environment. This analysis required a sledgehammer, but if you follow our daily price index and listen to our forecasting service there’ll probably be no need for your analysis to get so violent.