US Construction Backlog Declines in Q4, But Still Higher Than 2013’s

The Associated Builders and Contractors’ (ABC) Construction Backlog Indicator (CBI) for the fourth quarter of 2014 declined 0.1 months, or 1%. Despite the quarter-over-quarter decline, the backlog ended the year at 8.7 months, which is still 4.4% higher than 2013’s.

“Inconsistent growth in the volume of public work continues to suppress the pace of nonresidential construction; however, private construction momentum continues to build,” said ABC Chief Economist Anirban Basu. “With hotel occupancy rising, office vacancy falling and demand for data climbing exponentially, a number of key private segments are positioned for rapid growth in construction spending this year. There are a number of factors that are likely to be beneficial to nonresidential contractors in 2015,” Basu said. 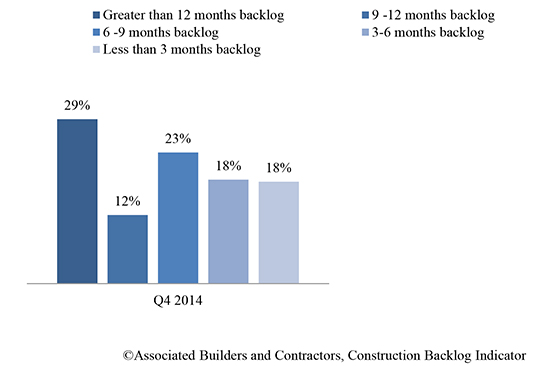 The average US construction backlog came down in last quarter of 2014. Source: Associated Builders and Contractors.

The average backlog rose in three of four regions, with the West representing a major exception. The declining backlog in the West can partially be explained by ongoing issues at West Coast ports, related economic uncertainty and  softening of public construction.

The Northeast’s backlog remained above 10 months for the second consecutive month, thanks to Boston’s technology industry, New York’s financial sector, Philadelphia’s diversified economy and Baltimore’s health and defense sectors. Also, Pennsylvania and Maryland are among the states that have raised revenues to help better finance infrastructure work.  In the Midwest, where shale-related production has spread to Ohio and Illinois and industrial production has been edging higher, average backlog expanded above 7 months for the first time in the history of CBI.