If you think miners or developers on land struggle with environmental legislators, spare a thought for those looking to develop resources under the ocean via seabed mining.

The International Seabed Authority, a UN agency, has so far issued 26 exploration licenses to governments and companies enabling them to operate in international waters but none of them have reached commercial realization. Even in national waters governments are coming down on the side of the environmental lobby when new applications are being put forward. After leading the way in supporting early proposals, the New Zealand environmental regulators have recently turned down an application from an ocean mining firm Chatham Rock to develop a site off the coast, some 450 kilometers southeast of Wellington, the FT reports.

The site in question is said to be rich in phosphate, used in fertilizer manufacturing, and said to hold enough to meet 25 years of New Zealand’s current consumption. Chatham Rock have invested $33 million over seven years researching the environmental impact and developing the extraction processes.

It is not hyperbole to say the ocean floor is the last great mineral reserve on the planet. Polymetric nodules, sometimes called Manganese nodules, sea floor massive sulfides and cobalt rich ferromanganese crusts between them hold many times the availability of certain metals as there is on land. One of the largest deposits is the Clarion-Clipperton Zone. The CCZ covers an area of around 9 million square kilometers, approximately the size of Europe, and is located in the Pacific between Mexico and Hawaii according to World Ocean Review. 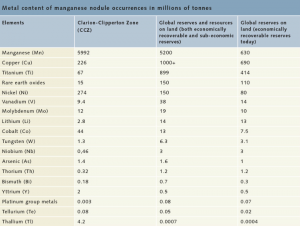 Environmental bodies worry that too little is known about fragile seabed ecosystems and allowing seabed mining could cause environmental damage on an unprecedented (and mostly unseen) scale. Sediment stirred up by dredging processes would be returned to the seabed after separation of the nodules but could cause plumes that would settle over a wide area.

They may well be right, but that probably won’t stop the industry from eventually moving forward. Metallic resources are too finite on land and the quantity available for exploitation in the oceans is too vast for an effective moratorium to last. Technology will play a part as ways are found to collect nodules, typically between the size of a potato and a football, but leave minimal disturbance of the surrounding seabed.

It’s a tall order; some of the richest resources are up to 6500 meters (20,000 ft.) below the surface. New technologies are being developed but investment is hampered by uncertainty among investors over environmental hurdles. Ultimately a way forward will have to be found, as available resources on the surface are exhausted but leaving mining companies to their own regulation is not the way forward as anyone who has witnessed the degradation caused by Canada’s tar sands projects or China’s rare earth mining will acknowledge.