Global platinum was in deficit last year to the tune of around 700 kilo ounces according to a report issued this month by the newly formed World Platinum Investment Council. Last year’s five-month strike in South Africa was expected, at its outset, to deplete reserves so much that prices would soar, but while they picked up the reality was above-ground stocks held by producers and the trade comfortably made up for the shortfall.

Some 905 kilo-ounces are said by the WPIC to have been drawn down in South Africa against a backdrop of global platinum supply down 8% to 7.2 million ounces. As this graph from HSBC shows, the rest of the world’s production remained steady but South African supply dipped sharply. 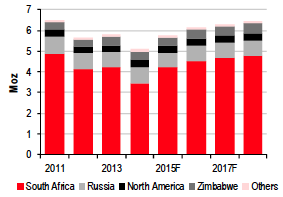 On the demand side there was growth in automotive, particularly in Europe where ever tougher emission regulations (Euro VI for trucks and buses and Euro 6 for passenger cars) are driving consumption from jewelry and industrial sectors such as industrial catalysts.

The standout counter flow was investment demand, which collapsed relative to 2013 because the new Rand-denominated platinum ETF of 2013 was not repeated in 2014. 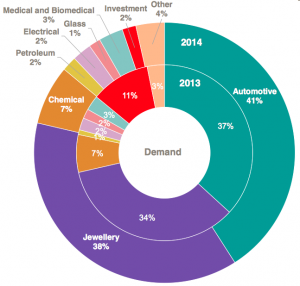 As this graph from the WPIC shows, industrial use held broadly steady – chemical, petroleum, glass, electrical, medical and biomedical – were broadly level or up. Automotive and jewelry (particularly in Asia) grew strongly but investment was the standout retrenchment driving a decline in gross demand according to Johnson Matthey of 3% last year.

Although the market is forecast to remain in deficit this year, the lack of investment demand is expected to cap potential price rises. In spite of a reduction in above-ground inventory there is still generally reckoned to be some 2.8 million ounces available with the possibility of further supply coming out of ETFs if the market remains depressed.

A lot of stock is being placed in an across-all-sectors rise in demand but with such a large proportion coming from jewelry, slowing growth in China is likely to undermine significant Asian growth in demand. Jewelry demand is broadly split between the US (35 kilo ounces), India (25 kilo ounces), Western Europe (5 kilo ounces) and the Rest of the World (RoW) (10 kilo ounces), with China itself contributing some 20 kilo ounces. A strengthening US dollar has depressed price rises in 2014 and will likely continue to do so in 2015.

The WPIC sees reasons for higher prices on the back of robust demand and a tightening supply market, a market which — it must be said — remains in deficit, but HSBC does not see this feeding through into higher prices much before 2016/17 when the bank sees prices potentially exceeding  $1,700/ounce.