This week, the UK’s Metalysis and GKN Aerospace announced a bold, new process that’s a significant step forward in the adoption of 3D printing/additive manufacturing for aerospace. The advance will allow users to essentially sinter titanium from rutile powder, a process that previously could be accomplished with only lighter metals.

The cost of the powder in 3D parts makes up roughly 50% of the final cost so a significant reduction in powder costs could be a major spur to the adoption of such technology in more applications and in industries beyond aerospace and medical devices, such as automotive.

This got us at the MetalMiner week-in-review thinking about the nature of manufacturing and how 3D printing processes, both additive and subtractive, have changed it. There have always been disruptive technologies in manufacturing. Injection molding and the advent of plastics, in general, disrupted several fields, but it’s hard to quantify such a shift as we’ve seen with 3D printing. 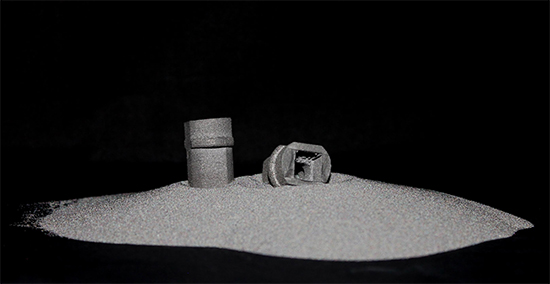 If titanium can be digital laser sintered from rutile, what else can we 3D print? Image courtesy of Metalysis.

The growth of hacker spaces, hardware start-ups, crowd-funding sites and the broader Maker Movement have shown that designing and fabricating real-world physical things is no longer solely the domain of giant companies with high-tech factories at their disposal.

Most of the economic levers we regularly cite as factors affecting our metal markets — such as exports, currency values and labor shortages — are not nearly as relevant to 3D printing manufacturers thanks to their smaller run costs, focus on prototyping and economies of scale. With major tech companies such as Autodesk wading into the space in an attempt to create standards and platforms, 3D printing maturity is a lot closer than it was just a few years ago.

With many of the steel and copper producers we cover not meeting expectations for first quarter results and waste, concurrently, still rampant in the entire metals life-cycle, according to a UN report, can traditional manufacturing survive?

Our Q2/Q3 outlook webcast will give the short-term forecast for metals and manufacturing, but longer-term the trend has to move toward the makers with their customization, less wasteful processes and ability to deliver parts and prototypes faster. Aerospace is already fully on board the 3D printing train, just look at what Boeing is doing with the process, and titanium will not be the last metal to experience a digital sintering breakthrough this year. Or in 2016.

Oh brave new world, with such 3D printed parts in it.