This is a fourth post on a series of posts on exponential technologies (see part 1, part 2 and part 3).

Yesterday, I realized I was running out of underwear, which means that I didn’t have any more excuses to not do my laundry. As I was walking down the street, I pulled out my phone and without clicking any button I said: “Ok Google, remind me to do laundry when I get home.”

Despite my strong Spanish accent, the phone perfectly understood what I meant to say. Four hours later, as soon as I opened the door to my apartment I felt a vibration in my pants. My phone knows where I live and it used its GPS to figure out that I had just arrived home. I looked at the screen, and saw the reminder. A couple of hours later… I had a new set of clean underwear. Thank you, Google! 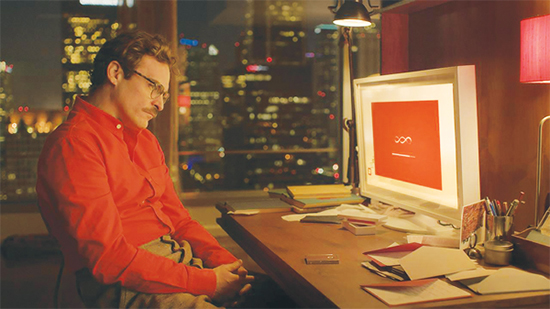 Samantha, what do my metals procurement options look like? “Her” image courtesy of Warner Bros.

This is not just an example of low-level artificial intelligence, but also a sign that AI is reaching the knee of the exponential growth curve, getting ready to run wild as a disruptive technology. AI is an exponential technology about to be found everywhere in our daily lives and jobs.

Most of the tasks that we perform day-to-day can be broken down into four fundamental skills: looking, reading, writing, and integrating knowledge. Today, we are at the peak of where computers can perform all these skills better than the average human. Let’s take a look at them:

It’s impressive how much better computers are getting at this. A good example is the ImageNet competition, which evaluates algorithms for object detection and image classification. Computers in this competition are now able to take any image or object, like an eagle or a BMW, and correctly slot them into unique categories such as birds or cars.

Today, there are AIs that can correctly decipher everything from a children’s book to complex tax forms far faster than humans. Companies are developing software that can analyze your documents infinite times faster that you could and for a fraction of the cost. And they even can do the writing for you.

Narrative Science is a technology company that knows writing AI well, the company has developed a platform that analyzes data from disparate sources, understands what is important to the end user, and then automatically generates perfectly written narratives. Credit Suisse is already making use of it. The technology automatically analyzes data from thousands of companies and then generates a written report in English that helps bankers to make their investment decisions. I bet the bank won’t be hiring many more low-level financial analysts from now on…

This is all about the cloud and its ability to take information from everywhere and accurately reach conclusions from it. In 2011, IBM’s supercomputer Watson bested humans on Jeopardy and just two years ago IBM uploaded Watson to the cloud so companies can now use it as a development platform.

How Does This Affect Procurement/Supply Chains?

It wasn’t that long ago when we manually cataloged data with a pencil and used our brains to crunch the numbers. That was quickly replaced by Microsoft Excel spreadsheets and soon Artificial Intelligence will replace it all. The key difference between AI databases and spreadsheets is what you can do with that data.

Ray Kurzweil, futurist author of five books on artificial intelligence, director of engineering at Google and founder of the Singularity University, predicts that computers will be more intelligent than humans within 15 years. That means that computers will get your jokes, be funny and be creative. Yes, your daughter/son-in-law might be an operating system, just like in the movie “Her.” 15 years seems scarily soon, but Kurzweil has been very accurate in most of his futuristic predictions so far.

Kurzweil believes that biological humans will not be outpaced by the AIs “because they (we) will enhance themselves (ourselves) with AI. It will not be us versus the machines (whether the machines are enemies or lovers), but rather, we will enhance our own capacity by merging with our intelligent creations. We are doing this already.”

Will we soon see the industrial buyer being an intelligent machine that interacts with other artificial machines (suppliers)? I am sure Kurzweil believes that.