It may seem absurd at first sight to compare an icon of America’s heritage, the Harley-Davidson, with a British transplant to India from the 1940’s, but both the Harley and Enfield share at least one thing in common. Both trade on a marketing image that is soundly retro, much as Harley has tried to appeal to a younger audience, it’s old guys like me that drool over those classic lines and make up the majority of their owners.

The Enfield also has a decidedly retro appeal with the range being largely unchanged from the original 1940’s designs; it oozes rugged simplicity and economy. The Bullet 500 single cylinder machine is essentially the same as made by Enfield from the 1940’s in the UK before Eicher Motors, a Mumbai-listed manufacturer of engines and commercial vehicles, bought Enfield’s Indian unit in 1994 and kept the brand alive as Royal Enfield after it closed in the UK.

Changes such as using aluminum instead of steel for engine components and fuel injection instead of carburetors have improved the reliability and economy but not changed the appearance. 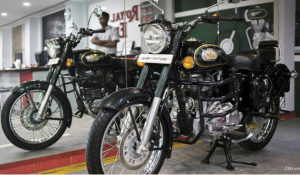 Clearly, the brands differ markedly in many other ways, not least price where Harley appeals to wealthy middle class (mostly middle age) bikers, while the Lee Enfield has a much wider audience that has helped fuel dramatic sales growth.

Indeed, so successful has the Indian-owned brand become that sales this last quarter of 2015 have outstripped Harley-Davidson for the first time, according to an FT article. The brand sold 93,000 bikes in Q1 this year, a 43% rise, compared to Harley’s 56,661, a 1.3% fall according to their Q1 investors’ report.

Needless to say, revenues don’t compare, a Harley costs 10 times as much as a Royal Enfield Bullet but therein lays the essence of the Bullet’s success. Eicher are aiming at cost conscious buyers in emerging markets and although the Bullet has a few celebrity owners such as Brad Pitt, the vast majority are after the low cost, economy and rugged simple engineering they can fix in their own shed.

Analysts say that by 2021, more than 160 million two-wheelers will be produced annually — a third more than today the FT reports, and most of those buyers will be in emerging markets. Royal Enfield are planning to establish an R&D base in the UK to develop the technology employed and keep up with buyers’ expectations.

Few would disagree with the suggestion that the Bullet’s engineering could be improved. But so long as providing the central premise of simplicity and low cost are preserved, it seems a fair bet that those iconic single cylinder machines will continue to be outselling Harley-Davidson in the year’s ahead.