Occasionally it is interesting to step back and look at global trends over a longer term than one month to another or one quarter to the previous, and sometimes it is downright scary.

Today, we are all a little disappointed by a poor Q1 in the US. Europe is feeling a little better about a slight upturn and Japan, well Japan is struggling to gain traction in spite of repeated attempts to kick start its economy.

Several emerging markets are in outright recession, according to the Telegraph, namely Russia, Brazil, Argentina, and Venezuela are all contracting sharply. So is this a temporary setback or are these aspects of a deeper malaise?

Global growth is slowing, and not just on a month-by-month or quarter-by-quarter basis. The UN has cut its global growth forecast for this year to 2.8%. That’s still growth, of course, but this pace is only slightly above the 2.5% rate that used to be regarded as a recession for the international system as a whole, the paper says.

It would be easy to blame China but China, actually, is only part of the problem. All economies seem stuck in a global malaise of slow growth and falling productivity rates. An FT article illustrates the problem of productivity. As emerging markets are reaching the limits of easy growth based on catch-up technology, advanced economies are concentrating on services, which tend to have less scope for rapid efficiency gains.

New technology has centered on consumer products, which have made people better off and able to do more than in the past, but have not necessarily improved the quantity or efficiency of their work. 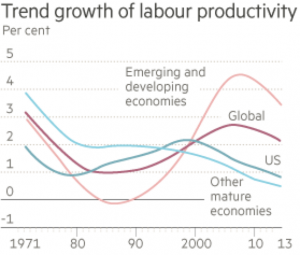 Maybe that is part of the problem in the tepid recovery from the financial crash. In the past, the US, for example, has recovered faster from recessions.

But this time Americans have chosen to reduce debt rather than go out and spend again. Long term that is not a bad thing if savings are recycled into investment, but firms, too, have been reluctant to borrow and spend.

Back to China, they have their own problems. They may be the second-largest economy on the planet but their per capita GDP is still low. The earlier model of capital investment in construction and manufacturing has achieved much, but is deeply flawed as a long-term policy creating a giant investment bubble chicken that has now come home to roost.

The country produced more cement between 2011 and 2013 than the US in the 20th Century, Dario Perkins from Lombard Street Research is quoted as saying. All that construction has left China with a massive inventory of unsold property and is now in a classic debt deflation spiral as excess capacity holds down prices.

Perkins believes China probably contracted outright in the first quarter. Electricity use has turned negative and rail freight has been falling at near double-digit rates. The knock-on effect in terms of reduced demand is impacting regional Asian economies. Japans exports to China dropped 15% over the last year and South Korea could go into recession.

As China’s growth slows, global growth slows. The Telegraph quotes Andrew Roberts from RBS who says China accounted for 85% of all global growth in 2012, 54% in 2013, and 30% in 2014. This is likely to fall to 24% this year and no other region is stepping in to pick up the pace. Even the US, which has the best economy of the rest, is suffering from layoffs in the oil and gas industry and a lack of investment.

The worry is as the “recovery” drags on the next dip will come along before economies have recovered sufficiently from the last recession. Central banks have nothing in the armory to fight the next one. Interest rates are at zero and most economies are not running a fiscal budget to allow them to indulge in Keynesian type stimulus measures. Rather than grumbling about low growth maybe we should be glad for any growth at all, the real alternative could be much worse.