Nothing’s Forever, Except Carbon-Dioxide and Taxes, Of Course

This is part two of a series on carbon-dioxide taxes and how quickly they could affect energy industry companies. Part one ran yesterday.

One could, and many will, dismiss the International Monetary Fund report “How Large Are Global Energy Subsidies,” as so much drivel, that, while there are undoubtedly costs to burning fossil fuels, due to health and pollution, the energy industry also pays huge amounts of taxes and provides low economic cost energy that allows our economies to function.

Whatever we may or may not think of the validity of this argument we should remember the IMF rarely deviates from the thinking of the US Treasury. If the IMF have gone public with this approach it will have widespread support among influential circles.

The basis for the IMF’s case is that fossil fuel companies have been allowed to keep huge profits while dumping the consequences on the rest of society, and that the only way to dissuade this practice is to tax the fuels sufficiently to compensate society, an analytical approach developed by Arthur Pigou, an early 20th century economist according to the London Telegraph newspaper.

If the full cost, under this model, were applied coal would become uneconomic overnight. Compare the article’s figure of $5.7 trillion with the annual subsidy for renewables of $77 billion, with the latest solar investments operating without any subsidy in some parts of the world.

The COPS21 conference is aiming to limit the rise in carbon to 450 particles per million (ppm) and to cap the rise in temperature to 2 degrees Celsius above pre-industrial levels by the end of the century. Climate scientists claim that we are currently on course for 4 degrees Celsius, and while their claims have been often shown to be wildly pessimistic the reality is a) temperatures are rising and b) if lawmakers believe the science it probably makes no difference what individuals think action will be taken. 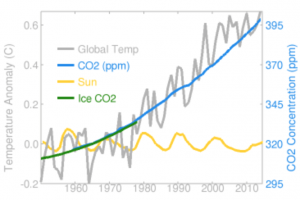 China has the additional drivers to limit emissions in that, more than any other nation, they are suffering the consequences of fossil fuel air pollution.

It probably isn’t too much of an exaggeration to say the survival of the Communist Party system in China rests on the government’s ability to achieve change and achieve it soon.

Beijing is already closing coal0-fired power stations near major conurbations and Deutsche Bank is quoted as saying it expects China’s coal use to peak as soon as 2016, an unthinkable prospect five years ago. General Secretary Xi Jinping has promised to cap total CO2 emission by 2030, and, as we have seen before when Beijing sets its mind to a program, it can achieve massive change very quickly.

China is building 1,000 gigawatts (GW) of solar, wind, and nuclear power over the next 15 years. They already have more wind power (115 GW) installed than the UK’s entire energy system. It plans to add another 22 GW this year — equal to 15 nuclear reactors — building hundreds of miles of turbines across the North China steppe. 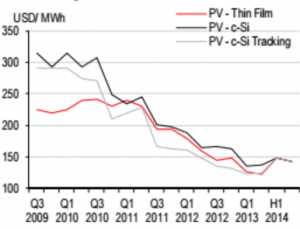 A report by University College London said the Arctic would never be developed under a 2-degree Celsius policy and that over 75% of Canada’s oil would have to stay in the ground, as would 95% of the coal reserves in the US, Russia, and the Middle East, unless there are radical advances in carbon capture and storage.

Yet little is being done, relatively speaking, to develop such technology. It is as if everyone has accepted it can’t be done economically. Compared to battery storage (the flip side to solar panel efficiency needed to make solar a viable alternative power source 24/7) where over 220 research projects are underway in the US alone, intending to improve storage efficiency and bring down costs.

Even central banks are taking an interest, the UK’s Bank of England launching an inquiry into the viability of $5.5 trillion of investments in fossil-fuel exploration and development and whether this could represent a new “sub-prime” risk to the global financial system.

Not that new taxes would be introduced immediately, they would be phased in over time but many major investments – mines, oilfields or power station/consuming industries are predicated on earning a return over 25-50 years. Xhanges to carbon taxes, and the viability of the assets on which they depend, will come much faster than that.

PREVIOUS POST:
US Geological Survey Says US Mines Produced $77.6 Billion in Minerals Last Year
NEXT POST:
The Stock and Finance Trade: Coming to the Rescue of Aluminum Premiums Again?