As many expected, the Federal Reserve is keeping interest rates at record lows, due to, it says, a weak global economy, low inflation and instability in international financial markets.

“Recent global economic and financial developments may restrain economic activity somewhat and are likely to put further downward pressure on inflation in the near term,” the Federal Open Market Committee said in a statement released at the conclusion of its two-day meeting this week.

Thanks A Lot, Global Equity Meltdown

I’ll say. We’ve been closely watching bears abroad (particularly in China) for some time now. Will this mean a continuation of the low metals prices we’ve seen lately? Only time will tell, but the Fed’s reticence comes after another week of falling metals and other commodities prices. Since the recovery here in the US has always seemed fragile, many say there is no sense in raising interest rates now that global equities markets have fallen sharply in the last month. 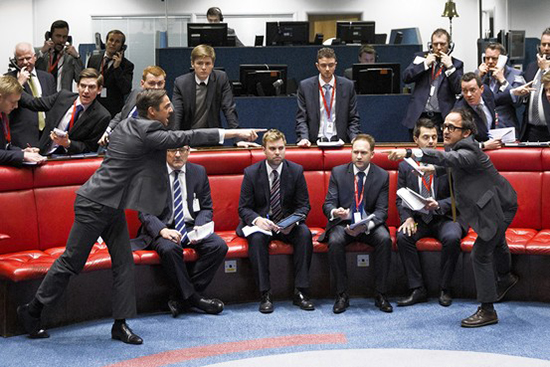 “Hey, you! I know you!” The LME’s one ring rules all trades. Image: The Wall Street Journal

Open outcry trading, or yelling and gesturing with your hands from a bunch of big red couches to make trades, on the LME is a time-honored tradition but also somewhat archaic. It’s sort of the like the wax seal on a bottle of whiskey, better technology certainly exists today, but it’s still fun to keep around to remind you of the LME’s humble roots.

The LME insists the ring “is central to the process of price discovery” so it’s committed to keeping open-cry trading alive. Don’t expect those red couches to go anywhere. Also, they’re quite comfy.

In oil news, the gap between the US West Texas Intermediate crude and Brent crude futures benchmarks hit its smallest point since the start of the year. The US oil market is still falling. Congratulations, Brent!

Specialty steelmaker Allegheny Technologies, Inc., has now been locking United Steelworkers of America-represented employees for 5 weeks with no negotiations or end in sight. The locked out ATI workers might be getting some company on the picket line, too, as negotiators for ArcelorMittal walked out of negotiations this week with the USW which represents 30,000 ArcelorMittal employees. Their contract actually expired September 1 but negotiations and regular word had continued until ArcelorMittal abandoned them September 12.

We may see more labor strife before in the steel sector before either of these disputes are over. With domestic steel prices reaching historic lows, the relatively generous benefits the USW has enjoyed for the past few decades are very much on the table, ArcelorMittal and ATI walking away from negotiations are proof positive of that.