There’s More Zinc Out There Than The Market Previously Thought

From being the darling of the bulls at the beginning of the year with supposedly the best fundamentals of any of the major non-ferrous metals, zinc is now the second-worst performer, kept from the bottom only by a historic fall in nickel.

In large part, the market price is being driven by inventory changes as a raft of recent articles from Reuters and the FT underlines. First, how and where have they changed? The visible inventory changes the market is seeing are all on the London Metal Exchange and nearly all at New Orleans underlining that these have nothing to do with end-user demand and everything to do with financial and trade parties activities. 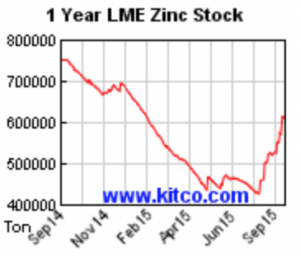 As zinc stocks dwindled, the market took it as a sign of constrained supply meeting rising demand. As stocks declined, prices rose at least until the big sell off in the Spring when all metals prices fell off.

Even so, zinc initially fared better than most, due to the belief that there was a constrained market until inventories hit a low point of 426,875 metric tons in August. Since then, inventories have surged 43% to over 600,000 mt, mostly in New Orleans. As Glencore’s Pacorini owns two-thirds of the 43 sheds in the city it is no surprise the bulk of the metal has turned up there.

Recent reports go some way to explaining this. Glencore is facing a debt pile of something like $30 billion and has been assiduously working to reduce this with rights issues, rationalizations and, you guessed it, stock sales.

The firm announced last month that it would raise $1.5 billion by cutting “readily marketable inventories” as Reuters quoted them, although no mention was made of what commodities would be sold and it’s true to say the firm’s gamut of metals, energy and agricultural commodities is wide. It was recently valued at $23.6 billion but as Glencore is one of the world’s largest traders of zinc ores, it’s a fair bet some of that total is both ore and refined metal.

Refined metal is much easier to sell into a terminal market like the LME than ore in a physical market. In addition, Glencore is more highly exposed to the European market so parking excess metal in a no man’s land like New Orleans (from a zinc consumption point of view) the less likely it is to impact the firm’s physical delivery premiums in Europe.

The surge in stocks and the collapse in prices are not solely due to Glencore, but investors have taken the inventory rise as a sign that the market is much more plentifully supplied than they had believed, that being the case they have shorted the price and in recent weeks driven it downwards.

There is every likelihood that financial players may come back into the market now that the LME cash-to-forward dated spreads have extended again. Spreads collapsed in the Spring, removing a source of apparent demand as it became uneconomic to roll over positions or take out new ones, but with the stock and finance trade potentially able to make a comeback, some of that excess metal may find a home, albeit temporarily anyway. However, unless that kicks in with a vengeance all that excess metal looks like it may be here to stay, at least for a while.