Home | Commodities | Zinc, Back in the Limelight, Faces An Uncertain Supply/Demand Picture
Commentary

Zinc, Back in the Limelight, Faces An Uncertain Supply/Demand Picture

LME Week has generated nearly as many opinions on the prospects for metal prices as attendees last week and it’s little surprise that, after a dismal year for producers and an unexpectedly benign year for consumers, metal prices showed little prospect of rising. That is before some fairly substantial production cuts announced by Glencore took the market by surprise.

The loss of some 675,000 metric tons of production next year from the planned closure this year of Century mine in Australia and Lisheen in Ireland have been superseded by news that Glencore is closing 380,000 mt of capacity at Mt. Isa and McArthur in Australia, another 80,000 mt at Iscaycuz in Peru and some 40,000 tons in Kazakhstan. That’s half a million metric tons of cuts from a market that was predicted by the International Lead and Zinc Study Group (ILZSG) to be in deficit next year to the tune of 152,000 mt.

On the Demand Side…

The only 2 negatives in the equation are, first, demand-side steel production in China, the world’s largest galvanized steel producer, is said to have peaked, possibly contracting slightly this year, and is predicted to rise by only 1.4% in the 2015 to 2018 period.

More significant, still, on the supply side is Chinese-mined zinc concentrate output has risen 11% in the first 5 months of this year according to ILZSG data reported by Reuters and is predicted to rise by a further 7.8% next year. A further 10% rise, Reuters speculates, would be enough to replace all of Glencore’s cuts.

Nor is China the only source of additional supply. A continued ramp-up at McArthur River should add another 115,000 mt and Kyzyl Tashtygskoe should add about 90,000 mt. Gamsberg remains one of few large projects on the horizon, likely to be in the region of 250,000 mt of capacity but commissioning is not due until the end of 2018.

No one is officially predicting that Chinese production will wholly replace Glencore’s cuts, but it remains a major unknown. In fact added to the fall in inventories this year, producers and analysts are once again confident a supply-side squeeze will finally arrive. 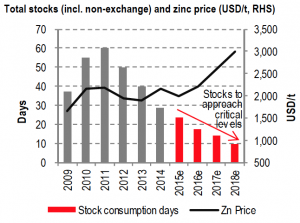 On the Supply Side…

Visible inventory has fallen steadily for 4 years with the recent uptick attributed to financial stock and trade players, Glencore reported to be among them, moving metal from off-market to on-market, as we reported recently. Indeed, this should be a caveat. LME and Shanghai Futures Exchange inventory has been falling but global inventory has not, the stock and trade has been storing metal below the radar and confused the picture, to what extent is difficult to say, but if that tonnage was included the fall would certainly not be as steep.

In HSBC’s most recent quarterly Metals & Mining Review, produced prior to the announcement of Glencore’s mine cuts, the bank was forecasting zinc prices would rise steadily over the next 2 years as supply-side constraints gradually worked through the market. They had factored in rising domestic Chinese zinc production but add the caveat that current low prices are dissuading new mine development in China just as they have done elsewhere in the world, significantly higher prices may encourage faster capacity increases in China.

Despite Zinc’s price spike from $1,700 per mt to $1,875 per mt in one day on the news of Glencore’s closures, the price has since dropped back to the $1,830s. In the short term, demand weakness and adequate supply will keep a cap on price rises, but these mine closures have the potential to change the landscape for zinc next year and could make the metal the standout performer among its peers. Time will tell.

PREVIOUS POST:
Gold Rises, Will it Keep Soaring? Or Fall With a Bouncing Dollar?
NEXT POST:
EPA and WOTUS: Why Do Manufacturers Care?