We wrote last week about the selective benefit of lower power costs to certain metals, notably aluminum and zinc spring to mind due to the large percentage of the production cost that is made up of power in the refining process.

Another metal that should be benefiting hugely at present is ferrochrome, but, unfortunately for producers, lower power costs are not a universal phenomena and major producers such as South Africa and China are still facing either restricted power supply or higher electricity costs.

Meanwhile, the International Stainless Forum released figures recently for the first half of 2015 showing that at 21.1 million metric tons of stainless melt shop production global output fell 0.7% from a year earlier mainly due to a drop in Europe, Africa and all of Asia except China.

The only bright spots for stainless production were the Americas and China but that still left overall production down. As a result, ferrochrome demand remains subdued while ferrochrome production continues to rise and the market remains in surplus.

Asian and South African production still dominate the market making up some 83% of global production so consumption and production in these markets is key to the state of the market. 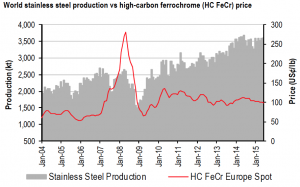 Demand has been growing strongly in recent years. HSBC estimates in their latest Quarterly Metals & Mining Review that ferrochrome demand grew at 10.1% CAGR between 2009 and 2014 but the trend has been falling recently while supply has continued to grow.

In South Africa a weak currency has helped producers to maintain margins and output while major new projects in China, India and Kazakhstan have added further supply to the market

As a result, inventory has risen creating an overhang and postponing the point at which smelter closures would have a profound effect on the market price. 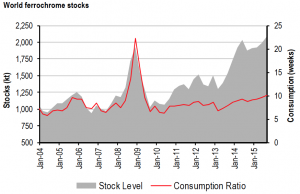 Weaker demand on the back of a slowing Chinese economy, recessionary conditions in much of South America and anemic growth in Europe will combine to see a surplus persist through 2018, HSBC believes.

As a result, prices are expected to fall further next year before beginning to pick up in 2017 averaging just $1.05/lb in 2016 and $1.10/lb in 2017. The good news for stainless consumers is that stainless mills are facing a benign cost environment with a weak iron-ore price, weak nickel prices and weak ferrochrome prices. In such circumstances, a significant rise in finished stainless prices appears unlikely for the foreseeable future.