Don’t Believe the Hype: Iron Ore Prices Are Set to Slide Again in 2016

Iron ore mining is a bad place to be this year but, by all accounts, it’s going to get even worse. However much BHP Billiton and Rio Tinto Group talk up their book they can’t be happy with prices at $48-49 per metric ton and, yet, even a senior BHP executive, Alan Chirgwin, vice president of marketing for iron ore, says there is no light at the end of the tunnel for depressed iron ore prices, which will gradually deteriorate over the next few years before finding a new normal well below $50 per mt.

He is quoted in the Australian Financial Review saying the price will gradually fall over the next few years before finding a new normal at the highest break-even of “a major producer in Australia or Brazil.” That, the paper suggests, would likely be either Fortescue Metals Group or Brazil’s Vale SA, which are both racing to avoid the unwanted marginal producer status. Fortescue is sitting at about $37 to $38 on break-even, while Vale is closer to $40 a metric ton. 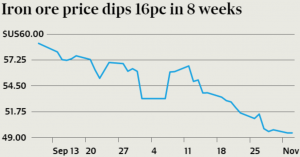 It is no secret the iron ore market is suffering from massive oversupply facing deteriorating demand. In fact the same is true for all steel making ingredients, metallurgical coal is currently at $80 per mt down from $300 per mt four years ago.

In an oversupplied market the bottom is usually found when the price drops to the point that sufficient high-cost capacity is forced to close and the market comes back into balance.

Chirwin is quoted as saying this is already happening, that 125 million mt of high-cost supply is on track to drop out the market this year, including 65 mmt from non-traditional producers (outside Australia and Brazil), and 60 million from China. But as Cliff’s Natural Resources CEO Lourenco Goncalves said to Bloomberg the majors are living in an imaginary world.

“In their imaginary world, 60 mt of capacity will go offline this year, then another 125 mt …next year,” Goncalves said. “That’s not the case. Everyone is driving down costs, everyone is trying to continue to cope. You’re not seeing any meaningful number of tons going offline.”

Indeed, only limited private mines in China have been forced to close. Many steel mill-owned and state-owned mines have continued to operate at a loss.

Meanwhile, miners continue to pile on new capacity. Vale aims to sell 300 mt to China in 2019, from plans of 180 mt next year. According to CEO Murilo Ferreira, Vale plans to double the number of ships with capacity over 400 kilotons to at least 64 in the mid- to long-term, depending on Chinese demand. Bigger ships will mean lower costs and a delay in the eventual pressure to cut back.

Demand in China is not, even in the miners’ estimation, expected to pick up. Indeed, BHP is predicting a modest reduction in demand next year. Meanwhile, falling inventory levels cited by some as a reason to suggest price support are probably more a reflection of how the supply chain reacts when prices fall with no prospect of an imminent rise.

Consumers won’t rush to replace stocks if they think the price will continue to weaken. Inventory at ports has dropped to 28 days from a historical average of 31 days but even here ANZ is reported as saying they expect inventory to rise as the steel mills enter the northern hemisphere lull, denting demand.

The consensus, even among usually bullish miners, is prices will fall further. If marginal price is the likely only support they could fall to $35 per mt and stay sub-40 for the next two or more years.