Home | Ferro Alloys | Chart of the Week: How Close Was the Highway Trust Fund to Insolvency?
Commentary

Chart of the Week: How Close Was the Highway Trust Fund to Insolvency? 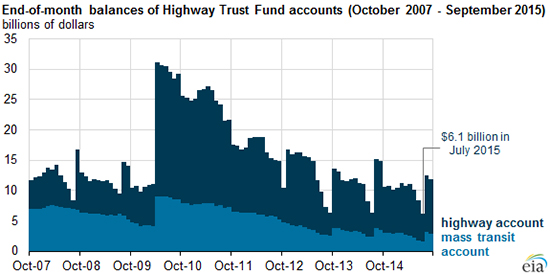 Earlier this year, the federal Highway Trust Fund (HTF) reached its lowest level in decades, ending July at $6.1 billion dollars. A congressionally approved transfer of more than $8 billion boosted the fund’s balance to end the fiscal year (September 30) at $12 billion, but that is still the second-lowest year-end level since 1984. As we speak, the House and Senate are working on a six-year funding extension for it. The fund pays for all federal highway projects and another (mass transit above) pays for all federal mass transit projects. Both are suffering as the gas tax that funds them has not been raised since 1993 and most cars are much more fuel efficient these days.