As the oil price continues to fall, there was an interesting proposal doing the (unofficial) rounds ahead of last week’s Organization of Petroleum Exporting Countries meeting in Vienna.

Detailed in a Financial Times article, the rumor was that Saudi Arabia would have been willing to cut output to support oil prices if other OPEC, and some non-OPEC producers, matched its cutbacks. Crucially, the rumor went, that would require Iraq, Iran and non-member Russia to cut back along with Saudi Arabia for the “deal” to be acceptable to the Kingdom.

At the end of the day, the other OPEC nations, Russia and the Saudis all decided not to cut output. Or at least they couldn’t come to an agreement to do anything other than stand pat.

OPEC oil ministers even dropped any reference to the group’s output ceiling for the first time in decades, highlighting disagreement among members about how to accommodate Iranian barrels of oil once Western sanctions are rolled back. 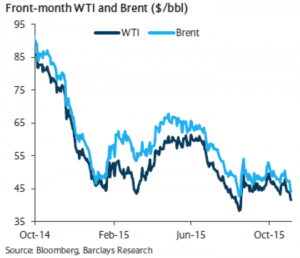 Without a doubt, all those countries would have liked to have seen higher prices. Iraq’s production may have roared back after the war there, but at $43/barrel the country is still bankrupt and, according to a Telegraph article quoting RBC Capital Markets, it can’t even pay the salaries of its security forces.

The Heat is on Tehran

Tehran’s production is a shadow of its former self, but could rise by 500,000 to 1 million barrels per day (bpd) next year when sanctions are lifted. The Iranians, though, are naturally not keen to talk about cutbacks when they have their sights set firmly on a massive increase in production and, as Riyadh’s longtime enemies, see suggestions they should limit their exports as unwelcome interference.

Nor is the third member of this proposed gang any more receptive. Russia needs every cent it can get with its economy in dire straits. The ruble’s value has collapsed, however, ruble returns from dollar sales of oil are the one bright spot for them. Oil prices may have fallen 40% this year but so has the ruble, supporting budget receipts. Oil production is therefore running at near record levels.

Outside the Proposed Gang of Four

This is not what other members of OPEC would like to hear, of course. Some of the non-Gulf states — Algeria, Angola, Libya Nigeria, Ecuador and Venezuela — are desperate for a rise in the oil price, but although Venezuela is talking about a unilateral reduction of their crude oil production, it is unlikely to lift the market and may have more to do with falling domestic output than a conscious effort to limit production.

Even in Saudi Arabia, the cracks are beginning to show despite yesterday’s announcement. Public expenditure has been frozen. Land taxes have been introduced and the subsidy on fuel means gasoline will start costing more than $0.15 per liter ($0.57 per gallon). The country’s dollar peg is also under strain and Bank of America is quoted as saying the peg is forcing the Kingdom to burn through $18 billion a month in reserves.

What Will Change the Saudi Mind?

Clearly the Saudis have an incentive, both internally and externally, to eventually reduce output and support a price rise, but speculators have so far bet, correctly, that they won’t. Short positions in US crude and Brent have reached 294 million barrels, according to the Telegraph. But to act unilaterally would be to admit their policy had been a mistake, a step they are unlikely to take willingly.

Likewise, support from Tehran and Moscow seems unlikely even if Baghdad were willing to counter reduced production against higher prices. All were hoping Saudi Arabia would crack first and do the cutting back for them.

Indeed, Russia has said as much. That OPEC should honor its own production limits before asking anyone else to cut back. Nevertheless, all eyes were on Vienna last week when the members sat down to discuss their options. Hope of a a policy change slowly die, but the seeds of a change could have been laid for a move in 2016. Either way, the impact will be profound for both consumers and producers next year.