Home | Company News | Iron Ore, Copper Miners’ Rough Year Might Not Get Much Better in 2016
Commentary

Iron Ore, Copper Miners’ Rough Year Might Not Get Much Better in 2016

As we’ve noted for much of the last month, commodities took a big hit in 2015. Mined raw materials, including iron and copper ore, had a rough year.

BHP Billiton saw its stock decline by 44.76% in 2015, a number that’s likely to fall further as fallout from Brazil’s Samarco mining disaster continues to hurt BHP and its joint venture partner in Samarco, Vale SA. Iron ore miners may be the worst off of a bad lot in the mining sector. China’s steel production is expected to decrease to 800 million metric tons in 2016 and, with it, demand for the steelmaking ore. Shares of Vale hit their lowest mark in 12 years in early December.

Anglo-American and Teck Resources are slashing payrolls facing such a dismal economic environment. Anglo American is cutting 85,000 jobs over the next few years and Teck has already announced that it’s laying off 1,000. Lack of demand in China and low prices are commonly cited as the culprits. 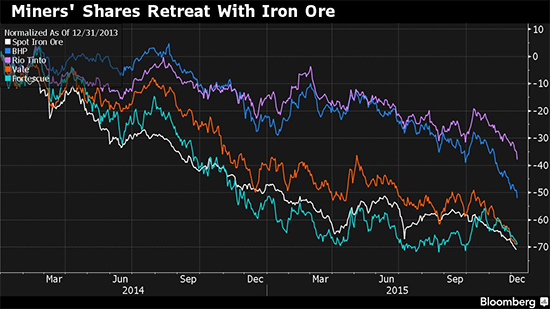 Values of major miners as the price of iron ore has fallen. Source: Bloomberg.

With iron ore hovering around $40 per metric ton, even the major producers are facing prices that are below their break-even point.

The most expensive operations at the four largest miners are on the verge of making losses at rates below $40 a metric ton, John Kovacs, senior commodities economist at Capital Economics in London told Bloomberg News. Kovacs estimates their break-even levels at $28 to $39, taking into account freight and other costs.

“The big four (Vale, Rio Tinto Group, BHP and Fortescue Metals Group Ltd.) will find it hard to maintain output at below $40,” Kovacs said in response to Bloomberg. “If prices remain weak, output from the highest-cost mines of the big four will be under pressure.”

UBS Group AG estimates that of the four biggest producers, Fortescue has the highest break-even cost of $40 and Vale’s is $34 in terms of ore landed in China with 62% content including interest. BHP’s break-even level is $29 and Rio’s $30, the bank’s data show.

If prices continue to fall it’s likely that more junior miners will fail and further cuts at the big four will ensue. The strategy of forcing out the smaller players over the last five years has eroded the cash reserves that BHP, Rio, Vale and Fortescue built up during the commodities super cycle. They may eventually reap what they’ve sown by not cutting production for so long.

London Metal Exchange three-month copper fell 25% in 2015. A small rally at the end of the year was most likely the result of portfolio balancing than anything else.

The global glut of copper ore shows no sign of falling as companies such as Freeport McMoRan, MMG Ltd. and Southern Copper Co. have sunk billions of dollars into new projects are pushing them to completion in a bet that the larger, lower-cost ventures will help them weather the price rout.

The supply growth is yet another sign the downdraft in commodities could last much longer than investors expect. It also will likely complicate plans by miners such as Glencore PLC, Freeport and Teck to pay down heavy debt burdens and shore up their financial health.