Stock markets are officially in bear territory. At least in Europe and Japan, they are, as shares fell more than 20% below their 2015 highs last week.

The US S&P 500, the Dow Jones Industrial Average and the NASDAQ composite briefly fell more than 3% to more than 10% below their prior peaks, meaning they entered a market “correction,” before recovering slightly. What caused such widespread chaos isn’t hard to find.

Equities have been dragged down by rising concerns over China, both growth and the falling yuan, by the wider global economic growth prospects, by sliding commodity prices, particularly oil, and questions over whether central banks remain willing to act as a backstop. With so much to worry about, investors dumped shares and bought safer government debt.

All markets have seen falls, but the most vulnerable and most resource-focused were hit hardest. 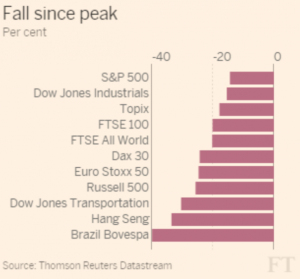 All share groups have been hit, but mining and commodity related shares have been hit hardest as the Bloomberg Commodity index fell to its lowest since at least 1991, and crude oil prices fell below $27 a barrel during US trading.

Miners’ share prices probably have further to fall. Many miners are still maintaining significant dividend policies when, in a sane world, they would simply be looking to cover debt payments and say ‘to hell with dividends.’

Most mining companies have now, effectively canceled any future expansionary capital expenditure and will mine existing assets for cash. They are entering survival mode. Witness BHP Billiton’s announcement last week that it would write down between $300 million and $450 million from its half-year underlying profit, according to Skynews. Further asset impairments and production cutbacks will be required this year if miners are to protect their margins.

The iron ore market needs a period of disincentive pricing. That is, prices that are so exceptionally low, for long enough, to force out excess supply. The supply markets need to rebalance as far too many miners are producing at prices deep in the cost curve and many of those companies are operating unsustainably.

Encouragingly, that looks like it is beginning to happen but it could take two years or more to complete. In the meantime, oversupply will continue and, to the benefit of consumers, prices will remain low. The commodities supercycle is well and truly over, now we need the superbust to rebalance the market.