Last month, my colleague Kyle Fitzsimmons gave us a heads up on the closure due to low zinc prices of the  Moorseboro, N.C., smelter operated by Horsehead Holdings. Moorseboro is just one of a string of smelter and mine closures in the last year that have contributed to a gradually tightening zinc market.

Yes, yes — before you wail — we have heard that the Zinc market was supposed to be on the cusp of tightening for the last two years yet large exchange stocks in New Orleans and falling prices have shown that there has been ample supply. 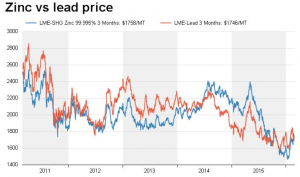 The tightening story started with the announcement some years back that Vedanta would be closing its Lisheen mine in Ireland and MMG would be closing the giant Century operation in Australia. While prices were high both miners extended deadlines and kept production going, but as prices collapsed the incentive dried up and both have now closed.

In addition, both Glencore and Nyrstar NV announced production cuts last year in response to falling prices. According to Mitsui Mining & Smelting Co. the zinc market will have a deficit of 440,000 metric tons this year, the most in more than a decade. Goldman Sachs agrees, saying last month that the investment bank could see zinc at $1,800 per mt this year. In Goldman’s view, zinc prices had bottomed and would lead the base metals markets in a rally this year. It would appear they are right, at least in terms of zinc’s relative strength to the other metals.

According to Reuters, zinc has just flipped to a $20 premium over lead for the first time since November as lead approached a seasonal lull due to the winter season drawing to an end and zinc approaches a seasonal uplift as construction picks up in the warmer spring and summer months.

Lead demand is boosted by cold weather as it generally causes batteries to fail. 80% Of lead demand is for batteries of one form or another. Prior to this, though, zinc had been at a $145 per mt discount to lead just one week before, Reuters reports. Add in the tightening supply market and investors are closing short positions and going long on zinc. As a result, zinc prices surged to $1,790 per mt three months during late February and are still up 20% on mid-January’s six-and-a-half-year lows.

Unchained from the Dollar?

Base metals had been the plaything of a volatile US dollar, but finally after a discontented winter of price falls one or two of them are at least beginning to respond more to the underlying fundamental picture as they are to simple dollar strength.

The copper price has also shown greater strength this last week or so on a similar story of impending shortages following mine closures, but the story is not yet as compelling for zinc. Zinc smelter treatment charges have been falling, showing that concentrate is not as readily available as last year yet recent Chinese imports figures show refined zinc imports have soared 150% in January as steel mills gear up for the post-Chinese New Year production of galvanized steel products.

Whether Chinese demand even stays at its current levels remains to be seen. Iron ore prices are up but many have seen Q1 strength more as a short-term technical squeeze than a medium-term uplift in real demand. MetalMiner data shows domestic steel prices have edged up in China, particularly for rebar, the most basic of construction steels. For the time being, zinc’s story remains the most compelling of the base metals and Goldman’s headline price prediction may yet be achieved if zinc can move beyond its psychologically important 200-day moving average of $1,790 per mt.